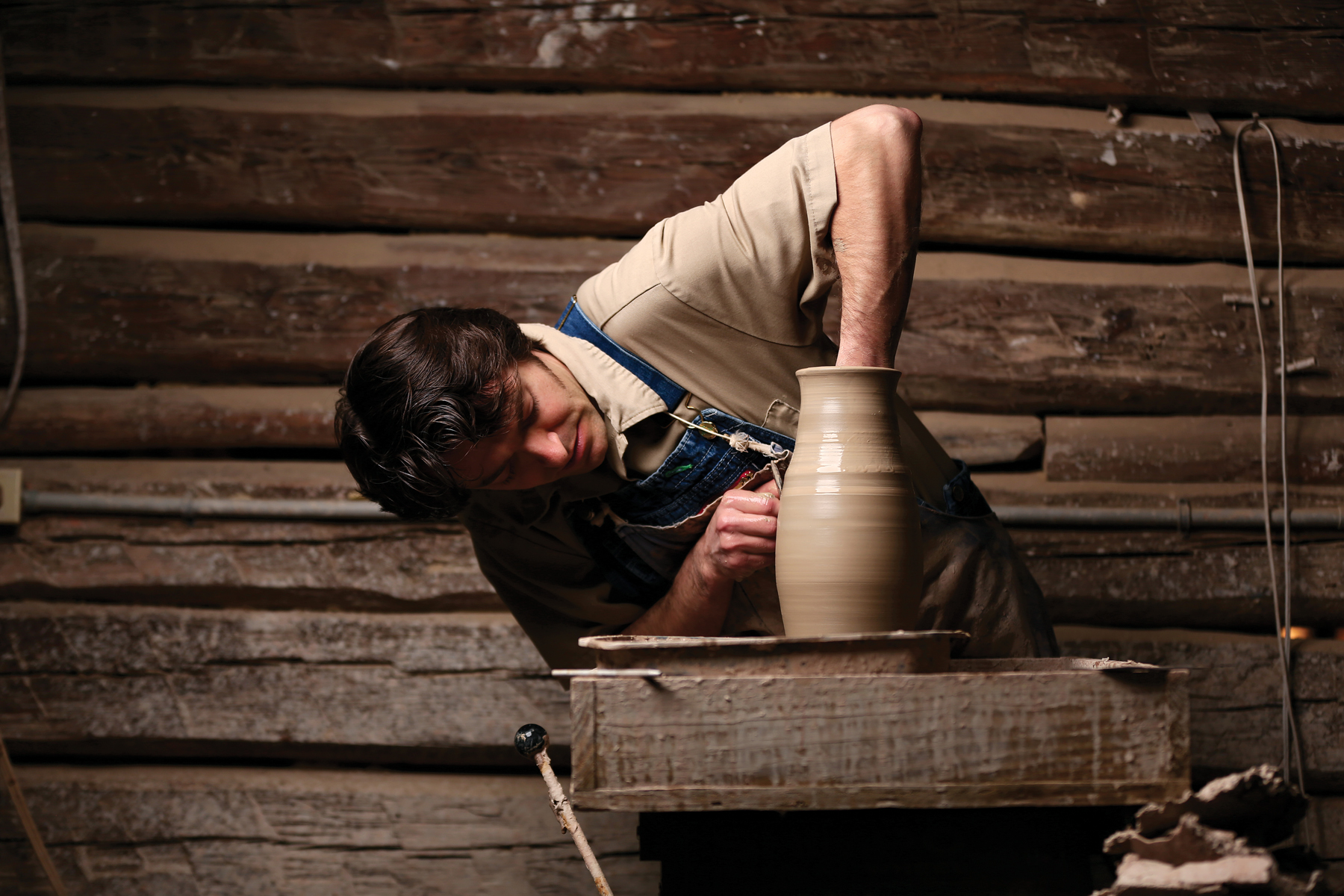 Amid the pine forests and rolling farmland of rural Randolph County in North Carolina—a three-hour drive from Greenville—the tiny burg of Seagrove is synonymous with pottery. America’s largest community of working potters claims 300 permanent residents, roughly two-thirds of whom are potters. That count includes Seagrove’s mayor, David Fernandez, who runs the Seagrove Stoneware Inn & Pottery with his wife, Alexa.

You’ll know you’ve arrived in pottery central when you spy the clay pieces mounted on the brick columns flanking the “Welcome to Seagrove” sign. Strewn along Highway 705 and the dusty roads that branch off of it, more than 100 potters work within a 20-mile radius of Seagrove.

Although the pottery tradition in central North Carolina reaches back some 250 years to the first Native Americans, and later to the European farmers who were drawn by the area’s natural supply of heavy clay soil, it was the establishment of Jugtown Pottery in 1921 that put Seagrove on the map.

Jugtown’s founders, Jacques and Juliana Busbee, were Raleigh artists who first visited the town in search of orange-glazed pottery similar to a “dirt dish” that had caught Juliana’s eye at a pie competition she was judging in Lexington, North Carolina, in 1915. The couple discovered stoneware aplenty here, but also found a waning pottery industry that had been hamstringed by Prohibition.

Influenced by the Arts & Crafts movement in New York, the Busbees set the wheels in motion in 1917 when they began buying wares from Seagrove potters and selling them in their crafts shop/tea room in Greenwich Village. In 1921, riding the wave of the demand for Seagrove pottery, Jacques built the first structure at what is now Jugtown Pottery. Juliana closed the shop in New York City five years later so they could dedicate themselves to preserving the craft of pottery in Seagrove.

The first potter the Busbees hired was J. H. Owen. “He was already a potter, making utilitarian items like butter churns,” his great-grandson Travis Owens (later members of the family added an “s” to the end of their name) tells me, “but the Busbees wanted to update the shapes and some of the glazes to appeal to a broader market. Much of what goes on in Seagrove today we really owe to them.”

They introduced the first art shapes, inspired by Chinese and Korean pots. Though the Owens and other potters traditionally used a lead-based orange glaze and, later, nontoxic salt glazes, under the Busbees’ management, they developed Jugtown’s distinctive copper-based Chinese-blue glaze, along with other colors. “The Chinese blue is probably our most well-known glaze,” claims Travis, who is part of an unbroken line of potters that stretches back seven generations.

“We still make a version of it today.”

Travis’s parents, Vernon and Pam Owens, purchased Jugtown Pottery in 1983. As they have always done, the Owens family formulates all of their own glazes and digs their own local clay. “Everything from the clay preparation to the end product is done by hand,” says the young potter who studied art and design at NC State. “We build the kilns, too. We feel it’s important to have our hands in every part of the process.”

Inside the hand-hewn log building, Travis leads me through a small museum that displays the evolution of Jugtown pottery from the early Busbee days to the present. “We have pots from every generation of our family,” he notes. Scattered around the grounds are several kilns, including a wood-fired groundhog kiln, a long, low structure traditionally built into a hillside, constructed on-site in 1920.

In the front rooms of the oldest continually operating pottery in North Carolina, I admire pieces crafted by all four members of the Owens family. Many of the influences in Vernon’s work come from the utilitarian Moore County, North Carolina, pottery tradition. Among other wares, Vernon makes all the candlesticks, a form he’s been perfecting for decades. His wife, Pam, takes her cues from early American, northern, and southern pottery. Her decorative pots are often embellished with crows and other animals. The work of his great-grandfather kindles Travis’ creativity. He produces most of the larger pieces at Jugtown—some ranging up to 75 pounds of clay—while his sister, Bayle, adorns her vessels with drawings of animals. “We work on the same shapes in different ways,” explains Pam, “but all our designs are based on Jugtown traditions.”

As the establishment of Jugtown Pottery sparked young artisans and fired up older potters to create “fancy ware,” pottery gradually made the transition from utilitarian to more decorative forms. With their googly eyes and often menacing expressions, face jugs became a popular form of folk pottery in the mid-1900s. The vessels trace their origin to the slaves who brought their stoneware traditions from West Central Africa a century earlier. In Seagrove, Terry King has been making these whimsical vessels since the early 1980s. Each hand-formed, wood-fired face jug has an expression and personality of its own, reflected in the name that King carves into each pot.

Another of the old guard of Seagrove potters, Phil Morgan, who grew up six miles from his present-day shop, is internationally known for his stunning crystalline pottery. He was discovered by Good Morning America in 1995, when the staff was researching stories in every state for the show’s 25th anniversary. Morgan had his first 15 minutes of fame on the program in November 1995, and his celebrity rose from there.

The World Master Potter discovered crystalline pottery in a gallery in Pinehurst, North Carolina, in 1976. “I couldn’t afford to buy the piece I liked,” he recalls, “so I went home and taught myself how to make it.” Today, Morgan mixes his own porcelain from clay he obtains from North Carolina, Georgia, and Tennessee, and coaxes flowerlike crystals out of a zinc-oxide glaze in a complicated firing process he developed decades ago. “No one in the world does what I do,” declares Morgan, who manipulates the kiln’s heat to produce 3-D crystals. He melts the glaze at 1,700 degrees, then fires the kiln up to 2,450 to completely liquefy the glaze. The crystals form when he cools it back down to 1,700 degrees. “It’s like snowflakes forming in the air,” as he describes it. And like snowflakes, each piece is one-of-a-kind.

On Highway 705, not far from Seagrove’s center, Fred Johnston and Carol Gentithes ply their craft in a natural-light-filled structure they built five years ago. The couple is part of a new cadre of art potters who have come to the area in recent decades (Fred and Carol have been here since 1997), drawn by the town’s reputation for fine pottery and its supportive artistic community.

Johnston, who now teaches ceramics at High Point University, and his wife, Carol, who left a career in tourism to take up pottery, both produce their own distinct art wares. Many of Fred’s pieces, which range from updated moonshine jugs to rough clay plaques, reflect nature. Designs on his pots echo ancient cave drawings and early Native American rock paintings, while other symbols pay homage to members of his family. His ubiquitous bees nod to his beekeeper father and grandfather, and totemic animals honor the wisdom of his grandmother. His forms find inspiration in the couple’s travels to places like China and Greece, as well as from specific architectural elements that might catch his eye, such as the top of an old chicken-coop ventilator.

Fred’s techniques mix old and new. He follows tradition by digging his own clay and using a wood-fired kiln, but also experiments with glazes he makes using ash from rice hulls. For some pieces, rather than refine the clay he digs, he leaves the rocks and leaves in the mix.

“The idea is to let the clay have a bigger voice,” he says.

Carol’s workspace is littered with sheets of decals, which she cuts out and affixes to her contemporary folk art pieces. “I have a degree from Duke University in English Lit,” she remarks, “so I approach everything with a story behind it.” She likes to play with color and texture, and animates plants with faces, creating a surrealistic effect in her fantastical hand-built animal figurines—perhaps a salamander or a frog—each of which tells a different tale. Whether native residents or new arrivals, traditional or avant garde, Seagrove’s potters each find their own distinct expressions in clay, the medium that binds them. Together these diverse artisans are sustaining Seagrove’s pottery tradition, guiding it, as the Busbees once did, steadily into the future.