Standing strong on the piney, peppery back of juniper berries, gin is not just your parents’ libation anymore. All the rage in the years before Prohibition, gin has experienced a resurgence since the turn of the millennium, inspiring mixologists to jigger with new gin cocktails beyond the classic martini. Depending on who’s making it, gin is distilled in a potion of different botanicals that infuse each brand with its own signature magic. Sample these small-batch gins from the Carolinas.

While not yet available in South Carolina, Chemist gin is sold at ABC stores throughout North Carolina, as well as at the distillery’s on-site bottle shop.

Gin was one of the first spirits that Scott Blackwell and his wife, Ann Marshall, made after they opened their distillery in Charleston in 2013. Pending some research and experimentation, the couple crafted their Botanical Gin using fresh lemon and orange peel, along with fresh licorice root, angelica root, and local lemongrass and lavender. The backbone relies on the floral nuances of fresh juniper berries. They followed their Botanical Gin with Barrel-Rested Gin, the same formula aged in toasted virgin oak barrels. “Like in whiskey, the wood rounds off the juniper so the gin picks up the orange and cardamom,” explains Blackwell. “It’s more what I call a wintertime or a sipping gin.” Mixed in cocktails, both versions of High Wire’s gin play well with citrus flavors.

Standing out on the shelf in its striking black ceramic bottle, Sutler’s Gin pays homage to the sutlers, or civilian merchants, who sold supplies—including alcohol—to soldiers during the Revolutionary War. Scot Sanborn, who founded Sutlter’s Spirits in 2015, attended The Citadel, which is where he first came across this military term that dates back to 1599. Out of the three different gin flavor profiles he first developed, the distiller released the one that dials back the juniper in favor of a “heart of lavender and coriander” brightened by notes of lemon and bitter orange. Sanborn says, “Sutler’s Gin is great in a Negroni, and it nails a classic martini with a lemon twist.”

Renowned for the liqueurs they hand-craft at their facility in Greer, Renato Vicario and his wife, Janette Wesley, added Vicario Gin to their lineup early last year. Their version is not distilled a second time; instead it is macerated with a combination of 27 herbs and spices, including lemon verbena, French tarragon, lavender, sage, and rosemary grown in the couple’s six-acre organic garden. The painstaking process involves adding specific botanicals in succession for varying periods of time. “You have to be extremely careful about how long you leave the spices in,” Renato cautions. “Nothing stays in for more than three days, in order to balance the taste.” During this process, botanicals soften the juniper, yielding a rounded and well-balanced gin that’s sippable on its own.

Shake all ingredients over ice and strain into a Collins glass. Top with club soda and garnish with a slice of salted cucumber.

Juice bell pepper and cucumber. Strain through a fine strainer or chinois, then add water, salt, and gin. 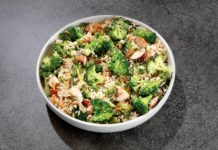 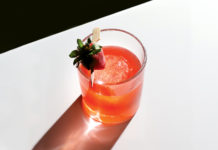 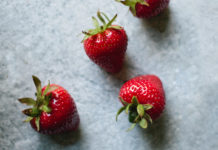