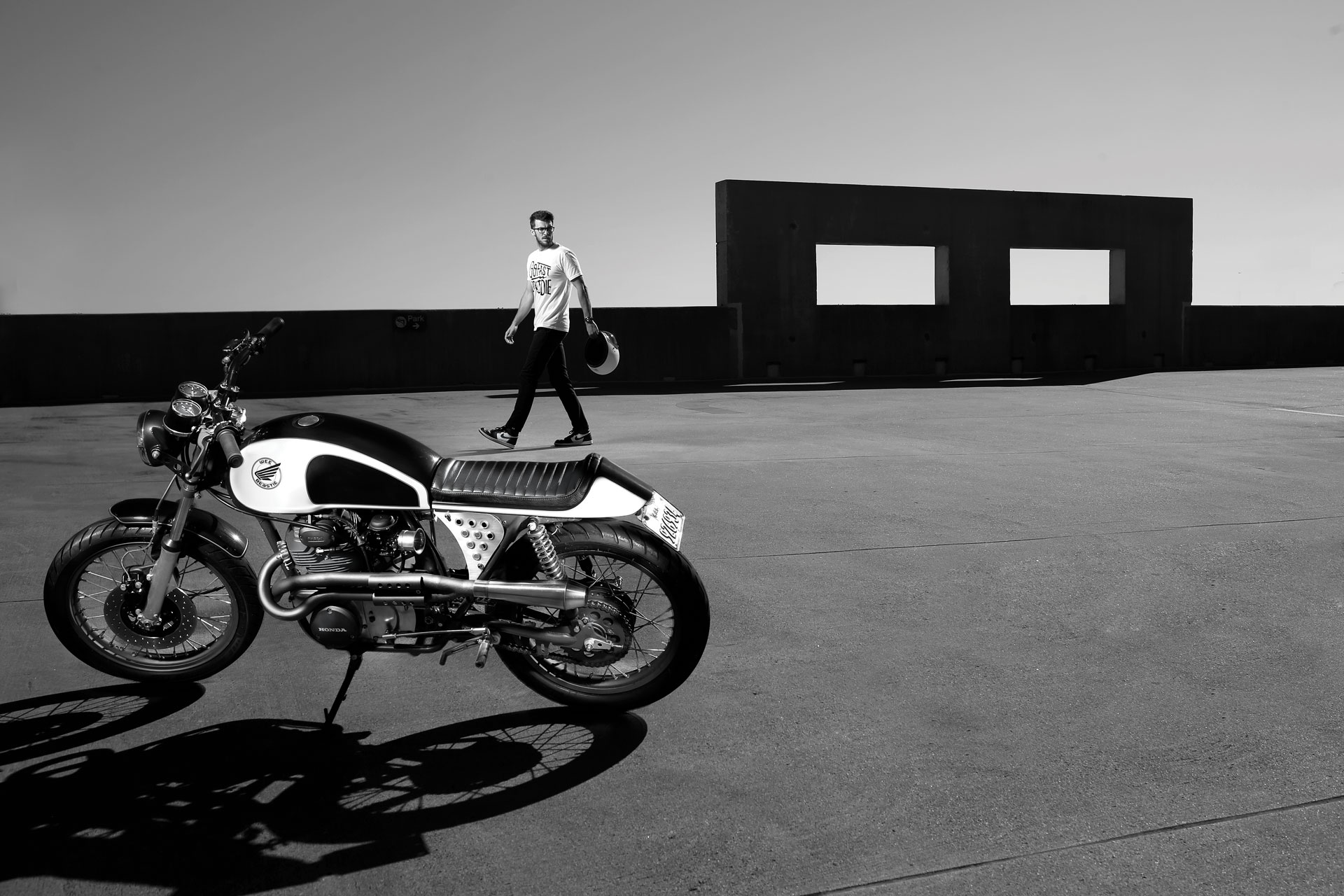 Neil Ferrier is standing in the middle of his new office wearing a smile so wide you’d think he’d just won the lottery.”This is what I always wanted,” he says.

The office is located at Hampton Station, a hive of locally owned businesses offering everything from craft beer and yoga to pottery and really good tacos. Neil’s office is a minimalist-designed glass expanse that occupies the back third of Due South Coffee Roasters. So, while Due South’s customers are enjoying a latte or espresso, they might catch a glimpse of Neil sitting at his desk with his earbuds firmly implanted. It’s doubtful they’ll have any inkling what he’s up to. But whatever he’s doing, it will most likely be discommon.

Neil is the owner, president, and “chief conspirator” of two different yet crucially intertwined companies: Discommon Goods and Discommon Concepts. Through both companies, Neil utilizes his design and engineering expertise to create exceptionally crafted products under his own label, assist corporations in solving design and development issues regarding their own products, and collaborate with some of the most well-respected manufacturers such as Shinola and The James Brand to bring new, design-forward, American-made products to life. Discommon Concepts would not exist if not for Discommon Goods, and Discommon Goods could not exist if not for Discommon Concepts. It can be a little confusing, and even Neil admits the particulars are a bit blurry.

As a kid Neil dreamed of attending design school and learning to create beautiful, functional products. But as much as he loved good design, it was the inner workings of products that really fascinated him. A motorcycle, full of clean, sexy angles can be a work of art. But understanding how that work of art functions is what really turns Neil’s crank. “A design is just a bunch of lines; it’s not a real thing.” he says. “I’m drawn to how that thing works when it’s real.” So rather than study design, Neil chose to major in mechanical engineering.

“A design is just a bunch of lines; it’s not a real thing,” he says. “I’m drawn to how that thing works when it’s real.”

While attending university in Scotland, Neil was given the chance to study abroad and spent his third and fifth years at Clemson. During school, while Neil’s fellow engineering students were accepting paid internships with petroleum companies and air conditioner manufacturers, Neil accepted a non-paying job with a pro-race team in Banbury, England. “I was stripping down rally cars for work and caddying on the side to make money,” he says. “That was the beginning of me starting to realize I wasn’t wired quite normally.” After earning his master’s degree in mechanical engineering, Neil was back in Scotland contemplating his future. While at Clemson he had fallen in love with a Southern girl. “As one does,” he says. “So I really wanted to be in America with Megan, and I almost took a job with an AC company in Virginia.” But then Neil took a chance and applied to a company that would change his life forever.

“I had always worn Oakley sunglasses,” he says. “And to me it sounded like a crazy place to work, so I applied. It took seven applications before I finally got a reply.” Soon Neil was on a plane from Scotland to southern California. As soon as he entered Oakley’s corporate headquarters, he felt his destiny was realized. “When I walked in the lobby all of my fear and nervousness disappeared,” he says. “I just knew I was going to work there.” But Oakley’s team didn’t share Neil’s certainty.

While being drilled during the interview process, one senior executive expressed concern over Neil’s lack of experience working with eyewear. “I said ‘I thought you guys were the eyewear experts. Just teach me.’” The executives couldn’t help but agree, and at twenty-two years old Neil was given a position on Oakley’s Research and Development team.

Neil’s first project at Oakley was to develop a fan-assisted goggle for Delta Force that would be perfectly silent and guaranteed to never fog. “Projects like that came in all the time,” Neil says. “And we were encouraged to create our own. We were allowed to show up at the CEO’s desk with our ideas. One day I threw down a piece of machine carbon fiber and said ‘Yo, I got this idea.’ That led to me going to Italy to learn about carbon fiber at Lamborghini. The point is that my experience at Oakley taught me that it was okay to be wide-eyed and excited about the world. That it’s okay to not follow the path everyone expects you to follow. Oakley celebrated that.”

One day at Oakley, Neil was invited to the CEO’s private bar to meet the head of The Macallan, one of the most respected whisky distillers in Scotland. A conversation began about the possibility of creating the world’s most badass hip flask. The CEO said “Sure!” and put Neil on the task in a freelance capacity. “So I started moonlighting for Macallan,” Neil says. “I was working on this project in the evenings, and I decided I needed a business name.” Discommon sounded good to Neil. It communicated his personality and his approach to design and development. Discommon was what Neil was all about. Discommon was the perfect name for his side hustle of a business.

“One day I threw down a piece of machine carbon fiber and said, ‘Yo, I got this idea.'”

“Designers always do freelance work,” Neil says. “It keeps them fresh.” While working at Oakley and freelancing for The Macallan, as well as other companies, Neil began to think about designing his own products that he could bring to market. His first concept was a “watch wallet,” a small zippered case that held cards, a passport, and two watches. “It was something I wanted for myself,” Neil says. “I was traveling a lot and I really love vintage watches. It made sense.” The Discommon Goods Watch Wallet debuted in the summer of 2015, coincidentally on the same day he left his job at Oakley. The Watch Wallet became a cult item, and soon Neil was developing other products including whisky tumblers, bottle openers, and straight razors, all under the banner of Discommon Goods.

“I started Discommon Goods with $5,000,” he says. “And it’s a terrible business model. We spend as much money as we make because we are always trying new things. But it is generally our exercise for Discommon Concepts. People ask me all the time, ‘How do you make money selling two hundred bottle openers?’ We don’t; we’re a design firm. Discommon Concepts is the sensible business.”

This is where things get a bit confusing. Discommon Goods and Discommon Concepts are two very different business models. While Discommon Goods develops cool, cutting-edge products sold under its own name, Discommon Concepts is a design firm that helps companies all over the world design and develop their own products. Through both businesses, Neil utilizes a variety of top freelance designers and engineers. “I’m the only employee,” Neil says. “But I’m fortunate because what I get to do is use globally leading designers like the head of design at Oakley and the former head of design at McLaren cars, and a sneaker designer for Nike.” Neil sets all of the parameters then intentionally places these designers outside of their comfort zones because he believes that really fresh design comes from discomfort. “So I’ll have a sneaker designer designing bicycles,” he says. “Or a super yacht designer work on a steak knife design.”

Discommon Goods and Discommon Concepts were born practically at the same time. After leaving Oakley, Neil began to realize just how much he had learned. Ten years in advanced product development at one of the world’s most cutting-edge design and development companies had given Neil an education no university could replicate. As soon as Neil left Oakley, companies began calling on him as a consultant, a fixer of sorts, a guy who could solve design and manufacturing problems. One of his first consulting clients was a cellphone-case company attempting to create their first metal case. “They realized they had no experience working with metal,” Neil says. “But I had die-casted, and machined, and injected molded titanium for sunglasses frames, so I was able to walk them through it. This happened over and over with other clients, and I just kept realizing how many things my time at Oakley had taught me. Variety is the craziest gift because it keeps you sharp. Whisky companies, bicycle companies, luxury companies, all coming to me and saying ‘How could we do this?’”

“I started Discommon Goods with $5,000,” he says. “And it’s a terrible business model. We spend as much money as we make because we are always trying new things.”

So while Neil was acting as a consultant to global companies, he was also using top designers to create products for Discommon Goods. It didn’t take long before he realized the two businesses could be perfectly intertwined. Neil could use the same group of freelance designers and engineers who were creating products for Discommon Goods as designers and developers for companies using him as a consultant. “So I started telling these companies that we were a design firm,” Neil says. That was the birth of Discommon Concepts. The biggest difference between Discommon Concepts and most design firms is that Neil’s company runs the full gamut of design all of the way through production. “Traditional design firms usually stop at the end of design and hand it off,” he says. “But the crazy thing is that’s when the challenges really start because the thing is not yet real. We are a little weird because the boss, who is me, is a mechanical engineer, my whole background is making things real. So I think one of the really cool things is we have taken a massive amount of development time out of processes for companies because even our rough concepts are pre-engineered.”

Now from a glass-walled office in the back of a coffee shop, Neil manages two companies with the same philosophy—his mantra is “We just get shit done.” One day Neil may be working with designers on a slim card wallet or leather watch roll for Discommon Goods and the next day flying to Detroit to work on a Discommon Concepts collaboration with Shinola. Another day, he may be on a conference call with a company in Hong Kong helping them develop a new product. As much as Neil would like to go into the details of the companies he works with, he feels it best to keep things vague. “Nondisclosure agreements are scary things,” he says.

So while the story of Neil Ferrier and his two companies may be a bit ambiguous, the work he does is not. At his heart, Neil is a wide-eyed kid still intrigued by beautifully designed products and how they work. He’s living his dream, and sometimes can’t believe he gets paid to have this much fun. “I have the same insecurities as most designers and design firms in that I’m afraid I’m going to wake up one morning and it’s all going to come crashing down,” he says. “But I just have to believe in the path and keep on chugging.” 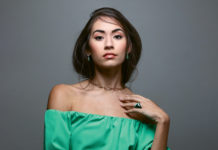 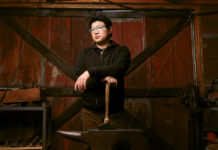 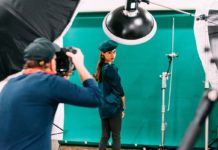 TOWN Style Behind the Scenes