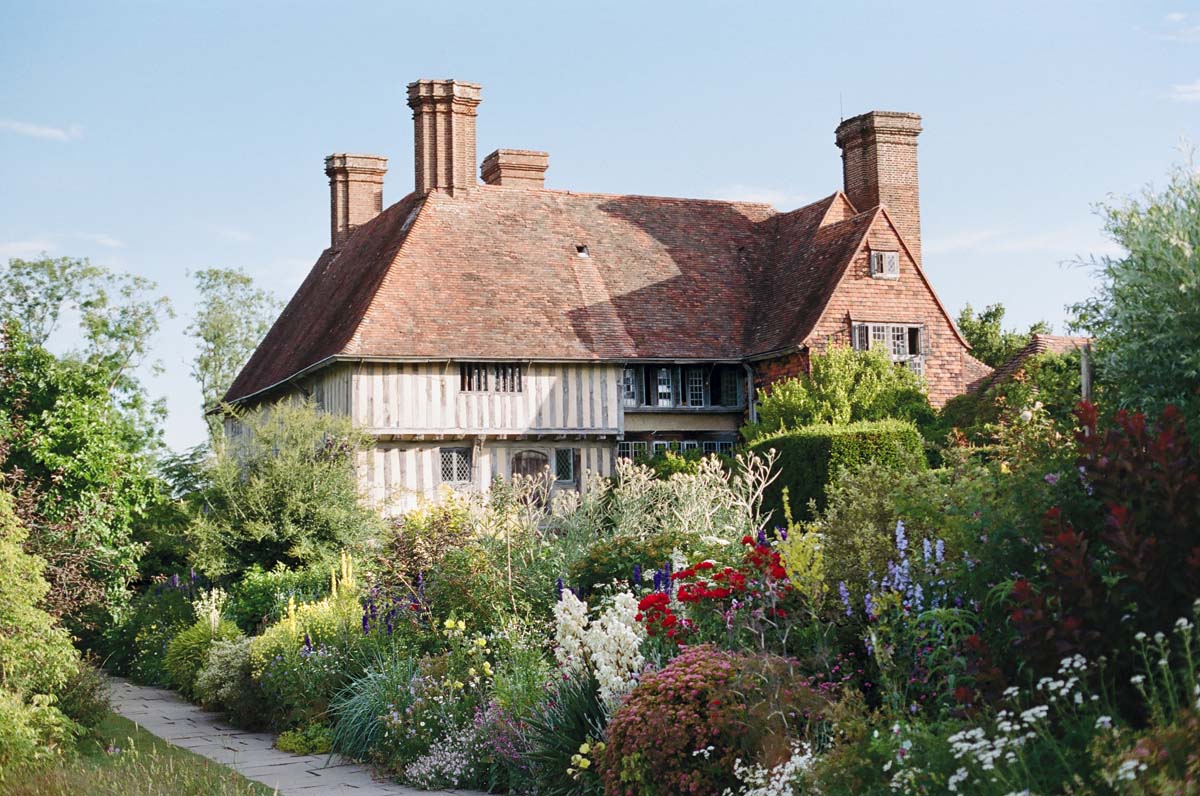 On my first day in England, I actually dumped the entire contents of my bulging carry-on bag onto the Northiam train station sidewalk while attempting to disembark with a month’s worth of luggage. It was less than graceful, and I instantly vowed never to travel with so much stuff ever again. It was the kind of special moment that gets freeze-framed in movie openings, mid-spill or mid-fall, with a voice-over in the background telling the audience just how said character came to be in this compromising position in the first place. So, let me explain how I found myself on my hands and knees in a country train station on a sunny afternoon last June.

Every would-be gardener signs up for a life of eternal learning, whether or not they realize that to be true at the outset. What began a few years ago as an occasional harmless flight from reality in the welcoming aisles of the local garden center quickly evolved into a yearlong garden certification pro-gram and a research stint at a nursery during which I purchased more plants than my slender paycheck could support. It wasn’t enough to sate my growing hunger to know more, and as inevitably as Alice tumbling through the looking glass, I landed back in school in 2019—enrolled in a horticulture program and committed to a complete career redirection.

In the universe that opened to me on the other side of this precipitous fall, I discovered I knew very little. The world of horticulture is populated by giants from the last hundred years who still cast long shadows into the present. One such giant is Christopher Lloyd, the late prolific author and plantsman extraordinaire responsible for taking a quiet manor garden with noble bones in East Sussex, England, to international prominence through revolutionary ideas and eclectic planting schemes. Legendary architect Sir Edwin Lutyens laid out the garden structure for the Tudor estate of Great Dixter in 1912 at the commission of Nathaniel Lloyd, Christopher’s father. As a young man, “Christo” returned to his family home and made the garden his life’s work.

Great Dixter enjoys a unique position by virtue of its historical context as well as continued stellar leadership in the hands of head gardener Fergus Garrett. The garden does not stand in the manner of many historic properties and museums, whose mission is to create a kind of time capsule—beautiful, but lifeless. If Dixter’s care were to calcify into a set of rules and maintenance standards, something essential would vanish. 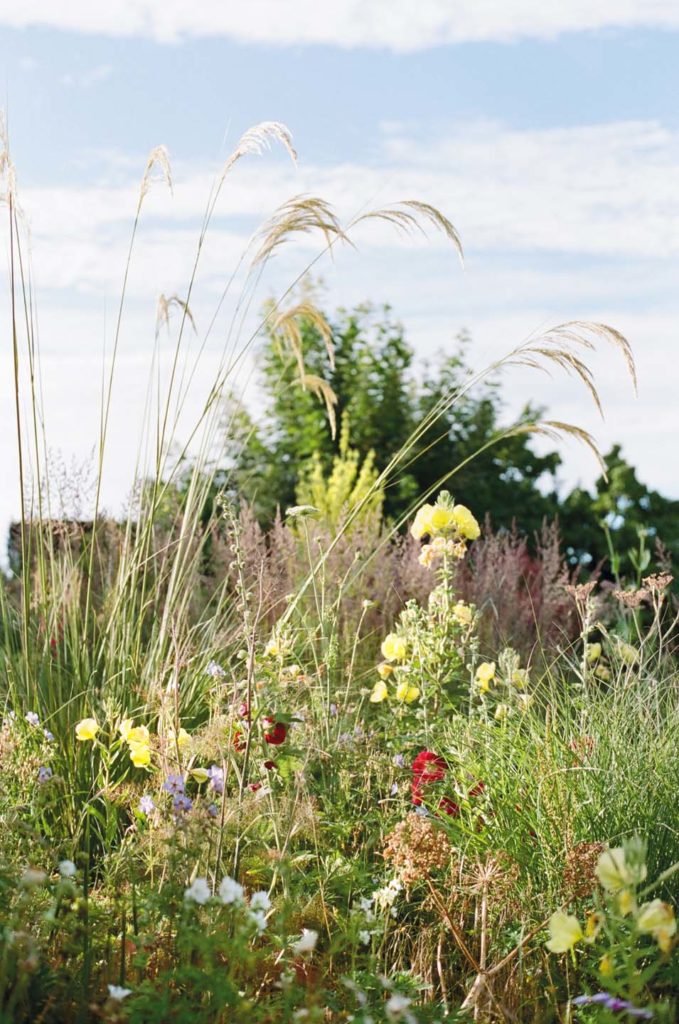 I see Dixter as a Mecca for serious garden-lovers, a nexus of English tradition and global openness. Of all famous gardens the world over, it topped my list of pilgrimage destinations from the beginning. I wanted to go to work and learn, not only to visit. Thus it happened that on the far side of many months of emails, a lengthy charity worker Visa application, and the purchase of steel-toed work boots, I was on my way for a month. (As an aside, it turns out the safety boot requirement is no idle precaution. The week before I arrived, a pitchfork tine found its way through a worker’s non-reinforced boot, to the significant detriment of that shoe’s inhabitant.)

On my second day in England, I reported for duty at 8 a.m. sharp, having been warned that stragglers would have to use the oldest brooms—akin to worn-down toothbrushes—for the daily task of sweeping the flagstone walkways clear of debris. We’d be there for 30 minutes, or 45, or until the whole garden was done. After our brooms were safely returned to the potting shed, the day’s main task commenced: refresh the iconic Wall Garden container display to reflect the high summer season. We removed pots of spent silene, added drifts of jewel-toned lilies about to come into flower, rearranged a spiky yucca here, added a structural conifer there, then stepped back to admire the result. I’ll never forget Fergus’s opinion of our progress—we’d inadvertently taken out all of the quirky textures, and as a result, our display was pretty, but not interesting. This was the first of several lessons: include one or three things that seem like they don’t belong. Surprise is essential to engagement and delight.

On my third day in England, and every day thereafter, I worked. In fact, I’ve never worked so hard in my life. I toted plants and tools up and down hills, tiptoed gingerly into beds to dig up lupines or plant dahlias, teetered on ladders to prune unruly climbing roses, weeded out extraneous verbascum and finished poppies, staked blocks of persicaria so plants wouldn’t flatten in a strong wind. I battled bindweed, deadheaded swaths of self-sown ox-eye daisies, and cleared hundreds of tulip bulbs leftover from spring. The other gardeners encouraged me to look at each angle and consider what, if anything, needed to change—and, after work was done, to leave the spot looking untouched, right down to erasing footprints in the soil.

I came to view the garden as a form of interactive theater. Dixter is not a static beauty to be viewed at a respectful distance, like a painting in a gallery. Narrow paths and lush plantings force the visitor to enter its embrace, squeezing between a yew hedge and a border of grasses, dodging an arching rose cane, or ducking under the reclining arms of a giant mulberry tree. The experience is invasive, aggressive, seductive; there is no audience, only human and botanical participants. Enter the gardener: an intelligent manager upon this scene, stepping in almost invisibly to plant, weed, remove, stake, prune, make a thousand editorial decisions, tiny on their own but without which the show would not move forward. And what about the plants themselves? They are all characters with individual roles, each entering and exiting the stage at an appointed time. Choreographed chaos reigns.

What might look to an unpracticed eye as accidental brilliance or natural perfection is, in fact, highly considered. Process is everything. The garden is not a machine or a problem to be solved. It is a conversation, and when we engage, we become more human. In his classic guide, The Well-Tempered Garden, Lloyd wrote: “There is room for many approaches to gardening, and they give us the satisfaction of expressing ourselves. Ours, in its humble way, is an art as well as a craft. At the same time, it keeps us in touch with the earth, the seasons, and with that complex of interrelated forces both animate and inanimate which we call nature. It is a humanizing occupation.”

As we experiment, tend, and pay attention, we grow as humans. I wrote the following to friends back home during my final week at Dixter: “One thing is for sure: any task in my own garden (or really, most any other garden) is going to feel so achievable. Pot up 100 seedlings? No problem. Weed my 400-square-feet of cutting garden? A cinch. Pull my 75-foot hose around? Easy.” The garden had not changed, but I had.

About the Author: Tessa Pinner is transitioning into landscape and garden design after spending six years running a luxury wedding cake studio. She is a member of the Greater Greenville Master Gardener Association, was elected as a fellow for the Southern Garden History Society in 2019, and plans to join the J. Dabney Peeples Design team in 2021.