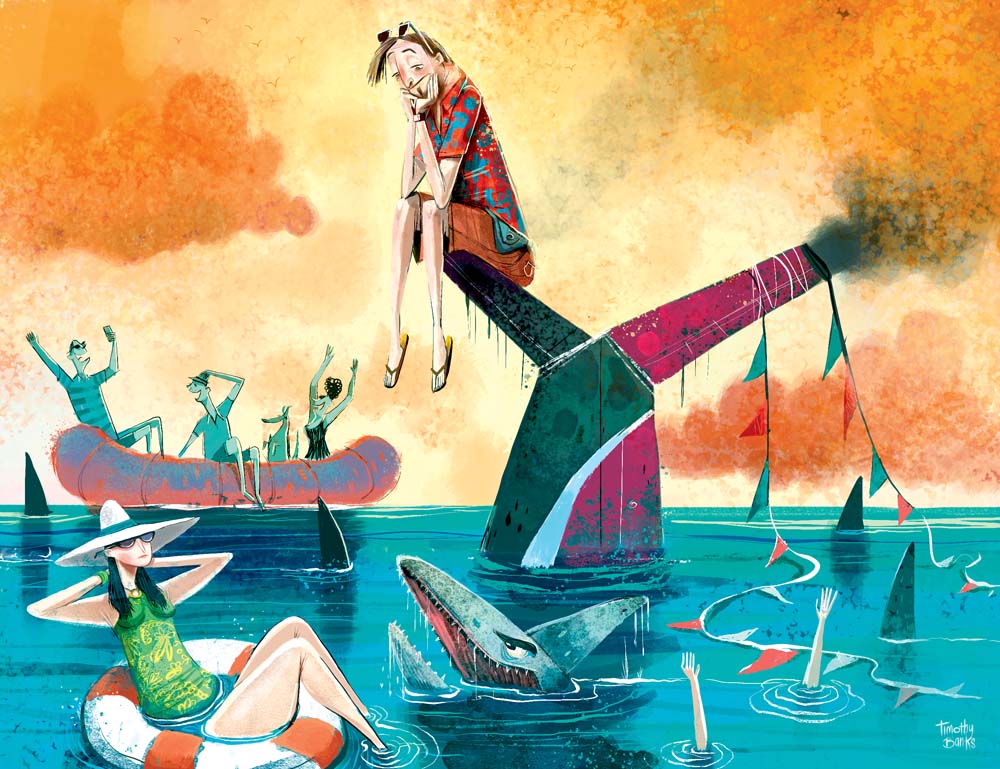 The man next to me at the bar was wearing a visor, a tank top, and a bathing suit adorned with pink flamingos wearing sunglasses. “I tell ya, buddy, this is the best vacation I’ve ever had,” he said, while raising a large glass containing the same color liquid barbers use to sterilize combs. I did not know this man and had unintentionally sparked his monologue by simply nodding to him when I sat down. “Have you played that Jackpot Bingo?” he continued. “It’s a blast. I won this visor playin’ it yesterday.” The man was interrupted by a chipper voice that crackled over a PA system to announce the rules for the day’s scavenger hunt followed by enthusiastic pitches for the shuffleboard tournament, the talent show, the ice carving demonstration, and the fact that “DJ Dennis” would be holding his daily “Motion of the Ocean” dance party by the “Twist ’n’ Spout” pool at 4 p.m. I took a sip of my Mai Tai and chanted a silent mantra: “Only five more days. Only five more days.”

If the poet Dante were alive today, he would surely add one more layer to his nine circles of hell: Circle Ten—The Megaship Cruise. I say this as a survivor of a seven-night Caribbean cruise aboard the Disney Cruise Line. Imagine taking all of the commercialism, mass consumption, contrived cheerfulness, anxiety, stress, and fabricated ambience of a Disney World vacation and shoving it onto a giant floating prison one cannot escape. Worse yet, imagine being trapped on this “magical” barge with 2,700 people who are absolutely giddy to be there. And even worse, imagine a third of those people being small, screaming lunatics with unlimited access to sugar.

When I found myself standing in line at the Midnight Buffet holding a plate topped with enough boiled shrimp to fill a hundred thermometers with mercury, I realized I’d been overtaken by the “magic.”

I wrote those two paragraphs on the second evening of the cruise, scowling at my surroundings like Ebenezer Scrooge at a charity event. But by the end of day three, a strange sort of transformation had occurred. I actually began to enjoy myself. It was if I had been placed in a trance by the gentle rocking of the ship. I joined a conga line and drank cocktails the color of Windex. I played bingo and watched with awe as a man carved a giant swan out of a block of ice. I danced without care as DJ Dennis spun tunes, like “Kokomo” and “Mambo #5,” that would normally make me cringe. At one point I even tapped my foot to a Jimmy Buffet song. I was obviously experiencing Stockholm Syndrome.

By day six I was completely unrecognizable. When I found myself standing in line at the Midnight Buffet holding a plate topped with enough boiled shrimp to fill a hundred thermometers with mercury, I realized I’d been overtaken by the “magic.”

On the seventh morning the spell was broken. The ship docked at Port Canaveral and all passengers were hastily ushered off board like the pallets of garbage being forklifted out through the cargo doors. I dragged my luggage to my car and stopped to look back at the ship. Over the next few hours it would be scrubbed, sanitized, and restocked with bottles of blue Curaçao and an ocean’s worth of shrimp. At noon, a new group of dumbfounded hostages would board and DJ Dennis would entrance them with the sounds of “Caribbean Queen” and “Margaritaville.” By that time I would be sitting in traffic on I-95, calling my friends to recount the horrors of my week spent aboard the tenth circle of hell.