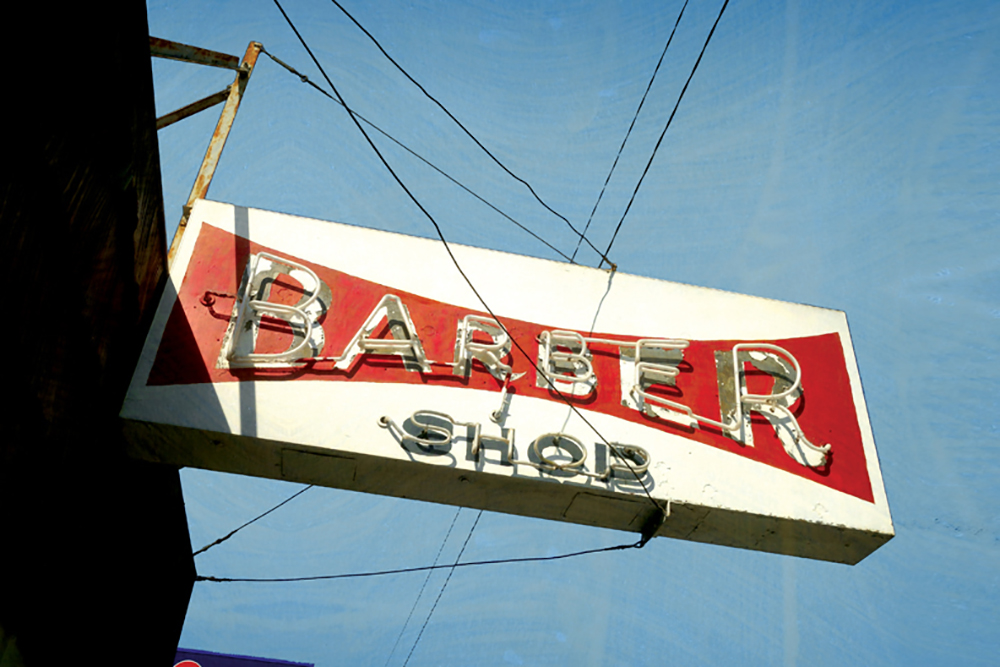 Alejandra Herrera blocks out any talk of how Mexicans have taken all the jobs, either from car parts factories moving or roads in need of asphalt. She lets her customers—all white men—say what they wish to say, either seated in the chair as Alejandra works the scissors, or lounging on lawn furniture, enjoying cigarettes and martinis behind the portable privacy fence she’d had her brother Hector build off to the side of where burned-to-the-ground El Clip Joint used to stand. No one can stop her. When the town council banned smoking in bars, the bars closed. When Alejandra’s landlord torched her building for insurance purposes, she did not look for a vacant salon chair to rent nearby. Instead, she relied on word of mouth: You can smoke and drink at El Clip Joint Al Fresco, weather-permitting.

“You know, girl, half the town’s divorced ’cause of you,” Ricky Moton says. He’s requested a #2, down from a #4. It’s late spring, and since his wife left for Myrtle Beach he foresees working the garden alone. “If I were a betting man, I’d say it ain’t got to do with letting all of us smoke and drink. I’d bet it had something to do with them being jealous. What you say, Cholly?”

She says, “Allergies. I get bad allergies outdoors.”

Charlie stares a three-count. He says, “I don’t know about the reasons anymore. Wives. Women, women, women. Wedding vows don’t mean much to women when the jobs leave town.” He pours another Thermos martini into his Solo cup and throws three dollar bills into the donation jug, plus two quarters. He says, “Again, Alejandra, I swear I didn’t have nothing to do with it. Faulty wiring is what they said. And you know as well as I it had come to me either jacking your rent up from $750 a month to about five grand, or take what State Farm offered.”

Alejandra says to Ricky Moton, “You want it square or rounded in the back, Señor Ricky?”

“Atlanta.” He says, “Patty thinks she’s gone somehow run into Ted Turner, end up his girlfriend, and get a job out in Montana caretaking a bison ranch.” Charlie Long spits onto the little patch of grass that once stood between sidewalk and threshold. He says, “You need to sweep up all this hair, Alejandra. Hair on the ground’s nasty.”

Alejandra offers Ricky Moton a hand mirror and holds another one behind his head. He says, “I trust you, señorita. And I don’t want to look at that bald spot getting wider.” Alejandra takes his mirror, holds it between her knees, unties his cape, and flaps his clippings into the air and onto the ground. She says, “No,” to Charlie Long. “Birds like to use hair for their nests. I leave my clients’ hair for the more unfortunate.”

Ricky Moton tries to stuff a dollar bill down Alejandra’s shirt front. She intercepts the money six inches from her chest. She says, “Save that money for the drinks.”

“You know I know our congressman, right?” Ricky Moton says. “I could call him up and get you closed down. Hell, deported. You don’t want to have to leave Dreytown, do you?”

Alejandra summons Charlie Long, then pats the cushion. She doesn’t say, “The Herreras lived in northern Mexico back in the 1820s, in Alta, California.” She doesn’t say, “My people have been Americans long before yours. I don’t need a green card, you idiot.” She says, “Let’s call him up.”

“Hot damn,” says Charlie Long. “That sparroll wasn’t even scared of us.”

Alejandra doesn’t correct his pronunciation or ornithological misstep. To Ricky Moton she says, “Who do you think cuts your congressman’s hair? He’s a fool who doesn’t comprehend mathematics, by the way, always asking for a #2 on the sides, and a #5 on top. No sane man mixes odds and evens, at least in the hair world.”

Charlie Long sits down. He says, “I don’t really need a haircut, I don’t think.” He takes his cigar out. “How’s about you just, you know, rub my scalp a little bit, Alejandra. Like Ricky’s saying, you do me right, maybe me and you can join up and get you here legally.” He laughs. “My scalp, by the way, goes all the way down to here.” He grabs his own crotch.

Alejandra lifts her dust mask from her mouth. She says, “I’ll keep that in mind, señor.” She says, “I have another Thermos of vodka, if you need it.” She says, “Birds can’t build nests on massages.”

And then she looks rightly into the future: By next year hundreds upon hundreds of songbirds—cardinals, sparrows, wrens, finches, bluebirds—will build nests in what had once been a prosperous town. Men will contract histoplasmosis, then die. She will be the last person left in Dreytown until, finally, all those wives return, relieved and happy, willing to elect Alejandra Herrera mayor, or at least a member of the school board, which can have a say in textbooks that offer valid American history.

George Singleton is the author of seven collections of stories, two novels, and a book of writing advice. His work has appeared in the Atlantic Monthly, Harper’s, Playboy, The Georgia Review, One Story, and elsewhere. An ex-Guggenheim Fellow, he’s received a Pushcart Prize, the Corrington Award for Literary Excellence, and the Hillsdale Award for Fiction. He’s a member of the Fellowship of Southern Writers. After teaching writing at the S.C. Governor’s School for the Arts and Humanities for thirteen years, he took a position as the John C. Cobb Endowed Professor in the Humanities at Wofford College. His next collection, Staff Picks, will be released in March.