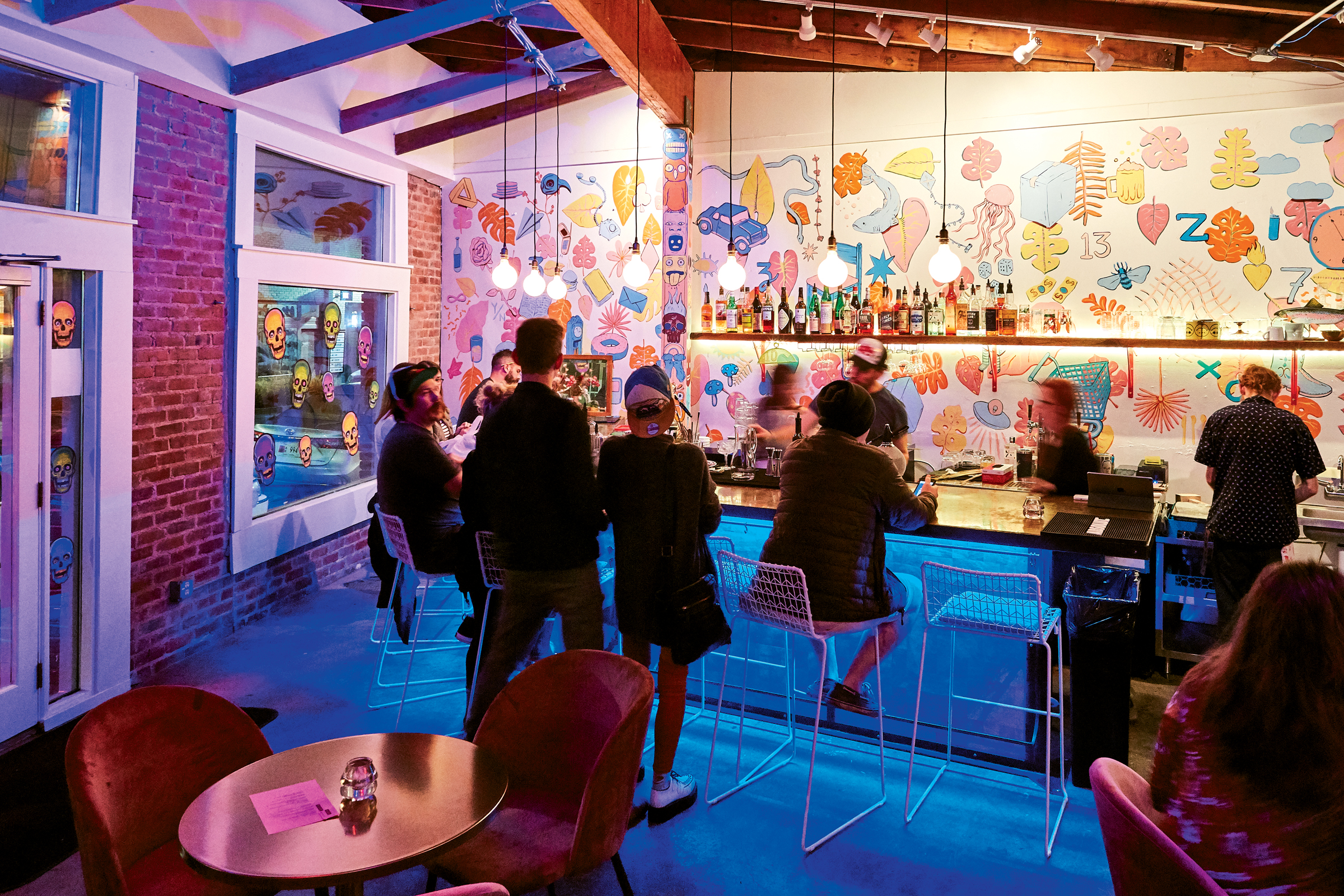 I don’t know if the people who invent new things always set out to do so.

I’m betting the Wright brothers didn’t build a plane with the grand intention to change the way the world works. Surely it was more about doggedly pursuing an idea that they believed in—and the thrill of taking to the air.

So, yeah, a bar is not the invention of flight. But at both EXILE and Bar Mars, something new is happening. Maybe even something grand.

And I know for sure that Stephen Phillips and Nick McSherry, founders of EXILE, and Alex George, founder of Bar Mars, didn’t try to “reinvent” or “reimagine” a bar. They each had ideas about what a bar could be, ideas about the kind of bar they wanted to frequent. Separately, they got to the work of making spaces that reflect their perspectives about drinking and community, openness and acceptance.

In some ways, it feels like they’re working off the same prompt. Or maybe it’s that they started in different places, took different paths, mixed different drinks, but landed on the same wavelength. Business-minded types might say this makes Bar Mars and EXILE competitors. But Stephen and Nick and Alex are good friends. They’ve spent hours playing late-night cards and cracking dad jokes at each other’s houses. Alex is making the food for EXILE’s bar-snacks program. Somehow they even share a bartender: Chris George (no relation), who’s taking a different role in both bars’ cocktail programs.

Turns out they share a lot more than a bartender. Stephen, Nick, and Alex’s interests overlap—but how those interests work their way into EXILE and Bar Mars doesn’t, not necessarily. It’s like any made-for-TV cooking competition: each chef creates something different with the same set of ingredients. The magic comes in tasting what they made. So what ingredients do these friends have in common? I asked them separately and then compared notes. All of their lists started with the same thing:

It’s no question that Chris George is talented, but he can’t be in two places at once. He can be making drinks in two places, though, thanks to the unconventional arrangement that Bar Mars and EXILE worked out. It makes sense that both bars would covet his skills: Chris George is one of the Upstate’s most legendary bartenders, with experience that stretches from Greenville’s pioneering Art Bar to The Cliffs to The Anchorage. A cocktail expert, he’s taking on a leadership role at Bar Mars, where he’s shepherding the drinks program and all the responsibility that comes with it. At EXILE, he’ll clock in under Nick’s and Stephen’s vision and enjoy the low-pressure opportunity to simply make drinks for people. “In any city that has a healthy bar scene, bars see each other not so much as competition but as collaborators. We want to raise the scene together,” Stephen says.

Fancy cocktails with unfamiliar ingredients aren’t for everyone. And even if you are a fan, you usually can’t order one in the same place you could kick back with a cheap beer. The bars are changing that, with reasonably priced beer on draft right next to complex cocktails at both EXILE and Bar Mars. “There’s this false dichotomy that you have to go to a nice place, spend money, and dress up for a good drink, or you go to a comfortable place but you can’t get a cocktail. That’s not what the first bars were like. We want to create a comfortable place where you can have both,” says Stephen. Don’t get me wrong: Stephen and Nick can nerd out over obscure amaro or pre-Prohibition cocktails, but they also have a genuine love for the kind of cheap beer they put on their list.

EXILE boosted hype in the months before opening by hosting pop-ups in collaboration with various bars around Greenville, including at Bar Mars, plugging in their glowy EXILE sign each place they went. The name has multiple meanings, the simplest being a nod to the bar’s location on the edge of the West End. The neon-style light is an homage to Stephen’s love of dive bars, which have partially inspired the relaxed, comfortable atmosphere he hopes EXILE will create. “I wanted it to look like it had been around, so you feel those elements you might think of as a dive bar,” he says. Traditional neon lights aren’t part of the aesthetic at Bar Mars, but colored light bulbs and blue under-bar lights give a modern take on neon’s familiar glow.

What do a lawyer, a Coast Guardsman, and a preacher have to do with this story? They could have been the reason this story didn’t exist—because in high school, the founders of Bar Mars and EXILE had different ambitions for their futures. With his sights set on law school, Alex, the chef-owner behind GB&D, Carol’s, and the GB&D food truck, earned degrees in English and graphic design, along with some time at BMW, before abruptly changing course and working in kitchens. Nick and Stephen, who worked together at The Anchorage and Restaurant 17 before opening EXILE, can trace their pivot back to early jobs in hospitality. “I was working in event management when I started bartending for the first time and pretty quickly fell in love with it,” Stephen says.

God bless anyone who’s ever been stranded on virgin daiquiri island; for people not drinking alcohol, historically, the options have been pretty bleak. The trend is swinging the other direction nationally and now locally, thanks to the thoughtful work EXILE and Bar Mars have put into building inclusive beverage programs. “There’s a heavy focus on mocktails, so you can drink just for the communal aspect of it,” Alex explains. “Sometimes you just want a drink that tastes good and you don’t even need alcohol.”

“The reason I love working in a bar is not the liquor, but the camaraderie and the kind of companionship you have across the bar with someone,” says Stephen. “From the get-go, we wanted EXILE to have a strong mocktail list and low-proof cocktails for our friends who don’t drink, or don’t drink a lot, or just want to hang. We want the space to be right for everybody.”

About drinking: both Bar Mars and EXILE want you to do more of it. Their beverage programs are designed around smaller, lower-priced cocktails that offer more flavor, more discoveries, more experimentation—without worrying about getting buzzed on one drink. Chris George has divided Bar Mars’ menu into “ours” and “others,” while EXILE will focus on the classic cocktails that originally inspired their bar, as well as ever-changing bartender specials. Each team brings serious credentials behind the bar, and it shows in the creativity and craft of the drinks.

Before drinking culture in America devolved into expensive connoisseur cocktails and trashy college bars (with a great gulf between), there was a golden age for bars—and for design. Phillips and Sherry have outfitted EXILE with a sleek bar top and midcentury modern furniture and accessories, right down to some of the bar’s glassware. Rather than tables, the space features low, lamp-lit, living room-style seating areas to encourage conversation and connection.

Midcentury furniture is Alex’s jam, too, but the only midcentury artifacts you’ll find at Bar Mars are the vintage glasses your drinks arrive in. What Bar Mars does have in common with EXILE is an intensely considered aesthetic. The standout, you’ve-probably-seen-it-on-Instagram feature is the wall art, of course, hand-painted by artist Christian McKinney in a palette more baby shower than bar. Pink and blue objects tumble across the walls, offering something new to puzzle over every visit. The assortment may seem random, but Alex says each piece of the painting—which includes a grocery cart, plants, numbers, a fish, etc.—has meaning to him or to the artist.

THINGS THAT DON’T BELONG IN A BAR

What bar in Greenville has windows?” Alex wants to know. Windows span a whole wall of Bar Mars, the former Village Grind location—vast ones that flood the bar with natural light before sunset. If it is dark when you’re there having a drink, it’s because Alex feels like the mood calls for it. He rides the dimmer as the night unfolds, delicately lowering the lights as the vibe changes.

Alex’s razor focus on the customer’s experience is one Nick shares, too. It’s why EXILE vetoed live music in their bar. Live shows may be a staple for lots of bars, but have you ever been happy for someone’s bad covers to soundtrack your night out? Instead, EXILE is curating for consistency. “We want people to enjoy the same EXILE every time,” explains Nick.

The trio’s love of puns sometimes shows up on their drink menus. Neither bar is interested in the deathly serious attitudes so annoyingly typical of the craft cocktail movement for the last 15 years. “I wanted the bar to feel happy,” says Alex, who named Bar Mars after his beloved dog. “There was this feeling with my dog, comfort and playfulness. Take this for what it is, but he offered total acceptance.”

Total acceptance seems to describe what’s on offer at Bar Mars and EXILE. They’ve created a low-key space for everyone, a space where you can order a cheap beer or a kombucha or a pitch perfect Old Fashioned, and no one will be too serious about any of it 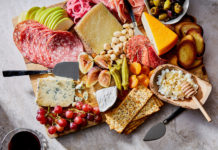