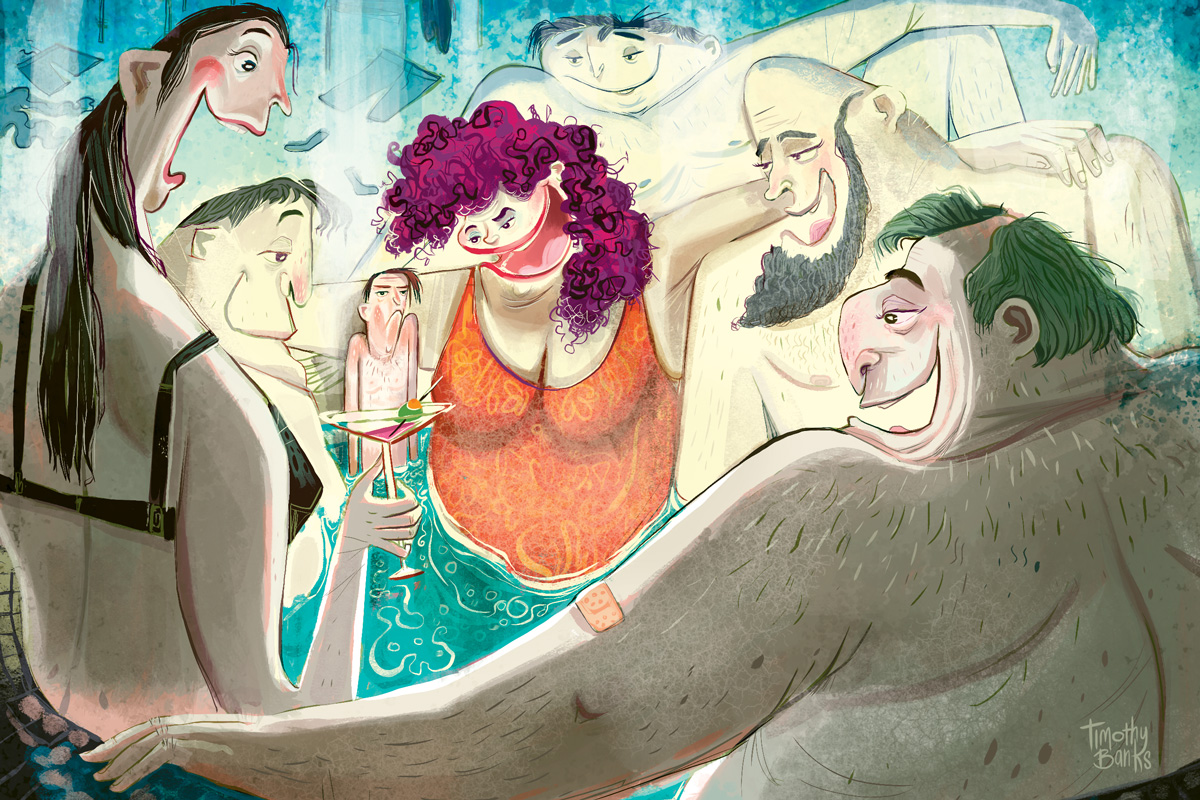 A few years ago I was sitting by the pool at a swanky resort in Palm Springs, California, when a man with a hairy back and tribal tattoos walked past me and slowly descended into the hotel’s hot tub. I was eating a club sandwich at the time, and it was all I could do not to gag. Not because of the man’s hirsute back or his questionable tattoo choices but because of a sign I noticed hanging nearby. The sign warned that anyone who had, and I quote, “currently active diarrhea, or had experienced active diarrhea within the past fourteen days” should not get into the hot tub. I myself have never experienced diarrhea that couldn’t be described as “active,” or at least “lively.” But the fact the hotel felt it necessary to warn guests that getting into the hot tub while having the runs was frowned upon told me a lot about the type of people who hang out in such places.

As startled as I was by the sign, reading it did not lead to an epiphany. I’ve always considered hot tubs to be simmering cesspools of bacteria. Any time I see one I shudder with queasiness—the swirling foam, the rising steam—it’s like a 500-gallon chlamydia cappuccino. The idea of soaking in one is as attractive to me as having tiny fish eat the dead skin off of my feet, which, believe it or not, is another activity some people seem to think is a good idea.

But it’s not just my germaphobia that keeps me out of these boiling bastions of bile. It’s also the social intimacy that these communal cauldrons facilitate. I’m uncomfortable rubbing elbows with the person sitting next to me on a plane much less brushing ankles with a half-naked stranger in a tub of foamy, hot water. There’s also the ribald reputation that seems to surround these pleasure pools. If I’m at a party and see a hot tub lurking on the host’s back deck, I can’t help but wonder if I’m going to be asked to place my car keys into a bowl. Of course not all hot tubs are seething with germs and not everyone who owns one is a swinger. But like moscato, corn hole, bluetooth headsets, and home décor bestrewn with inspirational quotes, some things are best avoided for the mere sake of retaining one’s dignity.

After a few minutes of soaking, the man in the hot tub in Palm Springs was joined by several of his friends. For an hour they chatted and laughed and sipped cocktails topped with tiny paper umbrellas. They were having too much fun to notice the man sitting alone a few yards away. The man eating a club sandwich while coated in sunscreen and covered in a layer of towels that concealed his own hairy back and dubious tattoos. The man with the pen and the notebook and the smug look on his face. The man silently questioning his superiority.