Dolly Parton peers through one of the windows in an old vacant building on Main Street in Clinton, South Carolina. Nearby are her friends Elton John, Blondie, and Aretha Franklin. Elton is wearing a feathered jacket and a pair of his 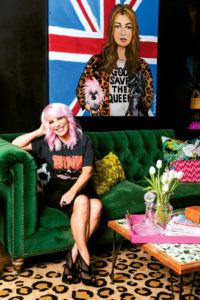 signature glasses. Blondie is leaning back, chilling. Aretha looks majestic, with a halo encircling her head. And Dolly? She is flipping the bird with the words, “What would Dolly do?” above her head.

This motley crew’s now vacant building is one that Emily Wilson purchased as an investment property last year. Wilson, whose day job is styling hair but who also has a degree in interior design, fell in love with the beauty of the old ballroom—originally built in 1875—and its potential, so she hoped to eventually restore it. It was a leap for sure. “My husband, Reed, and I believed in that building—so much so that we decided to sell our home in Greenville for funding to renovate it,” explains Wilson. “Unfortunately, after a year, we hadn’t sold our home. I was devastated. I felt like my dreams were dashed.”

So one weekend, she picked up some paint and a paintbrush, and she painted Dolly Parton—holding up her middle finger. “I was angry about the house not selling, and I had seen a photo of Dolly like this, so it just came to me when I was painting. It felt exhilarating. It was the first time in a long time I felt happy. The stress just melted away.”

After Dolly came Blondie, and then Elton and Aretha, and they just kept coming.

She laughs. “Boy, was I wrong. They noticed.” 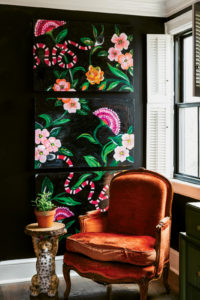 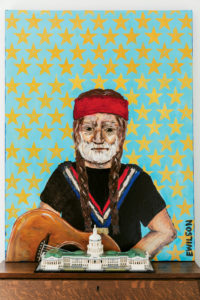 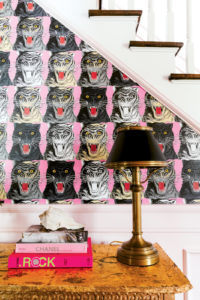 A few residents of Clinton complained about the paintings—mainly Dolly, whose middle finger was actually covered at this point. “I eventually was ordered to take down the paintings,” says Wilson.
“I cried for two days straight. Something about it felt deeply personal.”

However, others appreciated Wilson’s work—including Wilson’s boss at Wilson’s on Washington, Wilson Eidson. Eidson suggested that Emily hang the paintings in his salon, and ever since, the salon has featured a rotating collection of the artist’s work: an array of iconic cultural figures including Gwen Stefani, Kurt Cobain, Donald Trump, Dabo Swinney, Marilyn Monroe, A$AP, Kate Moss, Beastie Boys, John F. Kennedy, Amy Winehouse, Princess Diana, and a slew of others. “It became addictive,” Emily says. “When I paint people, I feel connected to them. Watching their faces come to life is so rewarding. And I’ve always had this thing for pop culture—I love the glamour, the excitement, and the pomp and circumstance of it all.

Wilson also has a thing for color. “When I work on a painting, I always think about the space it’s going in and what colors in the painting will complement the room and give it 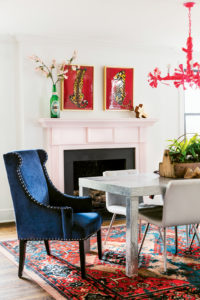 some pop,” she says. “I’ve always loved interior design and trying new things in spaces. My mother was a successful interior designer, and we worked together for a while after I graduated from Converse. I learned so much from her.

“My home has really become a reflection of my paintings and my personality. Take my dining room, for example. I began with a neutral wall, but then I added pops of complementing and contrasting colors and topped it off with a dining room table that I glittered myself. The glitter adds that extra layer of glamour,” she says.

Similarly, Wilson always finishes a painting with a bit of sparkling detail, whether that be glitter, beading, sequins, or glass.

“It adds a focal point and a little more drama—something unexpected—to each piece,” says Wilson. “I’ve realized lately that there’s a lot of anger in our society. Sometimes, it’s nice to see the lighter side. That’s what I want my paintings to do—transcend the daily grind and make others smile.” 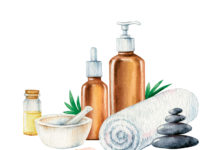 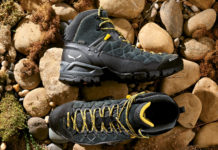 Good for the Sole