There’s the cold we know in the American South: winter days that are more like chilly spring ones. And there’s Canadian cold—the bone-chilling sort that hurts, crippling fingers and toes, lips and eyelids.

So, why would I encourage you to visit a Canadian province during the coldest season of the year? Because winter may be the most magical time in Québec City.

Admittedly, I knew little about Québec before traveling there. It had somehow remained off my bucket list, though years ago I’d spent time in Montreal on a whirlwind 24-hour birthday trip, so I was excited for a long weekend to explore its provincial neighbor.

Québec City is the oldest European settlement in North America, founded by French explorer Samuel de Champlain in 1608. The word, Québec comes from the Algonquin word Kébec, meaning “where the river narrows.” It remains steeped in French culture, with French spoken as its official language (however, many Québecois citizens also speak fluent English). The experience feels distinctly European, without the cost and time of traveling overseas.

Québec’s narrow, cobblestone streets and old-world buildings are visible reminders of its European origin, with the city’s fortified walls—which are the only ones north of Mexico—making it a UNESCO World Heritage Site. I spent most of my time in the quaint area of Old Québec (Vieux-Québec), perched above the Saint Lawrence River. The city’s hills remind me of San Francisco’s streets, and the view from my room at the impeccable Auberge Saint-Antoine, a Relais & Château property, is a winter’s dream. 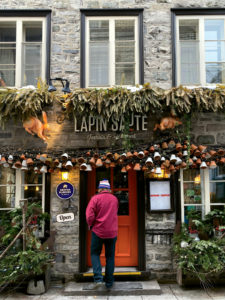 The Auberge is in the heart of Vieux-Québec, with views of the river not unlike those seen by Québec’s first settlers in the seventeenth century. The hotel itself is a living-history museum, steered by private family ownership with a desire to preserve the site’s historical significance. Recent excavations during renovation unearthed various bric-a-brac, including combs, toothbrushes, knives, eyeglasses, and even wine stoppers from more than 300 years ago.

There’s a palpable warmth coursing through the Auberge Saint-Antoine. I sense it via the doorman’s greeting. It continues up the stairs flanked by stone into the lobby, quaint with modern character and a crackling fire by which to enjoy cocktails from its Bar Artefact. Each interaction with the staff is personalized and intentional, like the hotel’s aesthetic details. Every suite has its own name and design, a historical artifact mounted beside the door, as well as another distinctive touch: a tray of stones outside each suite to place one’s shoes—or winter boots—before entering the room. 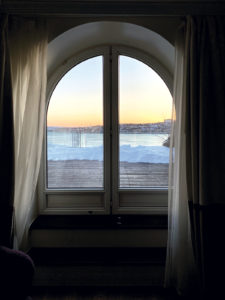 I audibly gasp at my view when I walk in my suite; its arched window opens onto an exterior balcony, which has been blanketed by a recent snow, with the Saint Lawrence River and wintry landscape beyond. I soak in this scene morning and night, first with my coffee, then with a nightcap, sometimes braving the cold for a view of the night sky. The room’s luxurious features, coupled with a deep soaking tub and waterfall shower, are enough to satisfy me here, but I have much to explore.

On my first full day, a guide meets me at the hotel for a driving tour of the city. Her American-sounding accent belies her native Québecois French, and she reveals that her father was French, while her mother was English. This duality of culture and language is layered throughout the city’s cobblestone streets, boutiques, historic sites, and restaurants. Québec has no shortage of fine cuisine (nor of its traditional poutine: French fries topped with cheese curds and brown gravy).

That afternoon, I hop on the city’s charming (and steep) Funiculaire du Vieux-Québec, an enclosed lift with a panoramic view of the river and snow-capped streets and roofs of the Old City, to wind my way through the German-style Christmas market—mirrored after Europe’s festive outdoor Christmas markets, with strung lights, local artisan and food vendors, music, and even a Winter Bar complete with beer, hot cider, mulled wine, or a shot of Jägermeister for quick warmth. 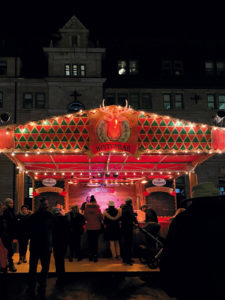 The city fully embraces the winter months, with a celebratory festival called Carnaval de Québec in February. During winter, in the heart of the city and beyond, locals bundle up for cross-country skiing through its many urban parks, downhill skiing outside the city limits, and for snowy walks through its light-filled streets.

To warm up after my cold-weather play, I schedule time at the city’s Strøm Spa Nordique, a Nordic spa with hot- and cold-water outdoor pools, saunas, specialized body treatments, and indoor and outdoor relaxation areas. Perched high above the Saint Lawrence River, the views from the hot outdoor pools are nearly dreamlike; steam swirls up and around me while I sink in, warmth penetrating my entire body as I take in the scene before me.

When I return, I meet Dagmar, the hotel’s general manager, for dinner at its award-winning restaurant, Chez Muffy, named for the hotel’s proprietor, Martha Bates Price. Breakfasts of rustic breads, pastries, and eggs in all preparations greet guests in the morning, while for dinner the chef creates hyper-local French-Canadian cuisine, selecting each ingredient at the height of its character, each dish expertly considered, executed, and composed. The dining room’s wood accents, country French–inspired fabrics, and iron staircase—with a fireplace in the middle of the space—lend an elegant, lodge-like feel. This, coupled with expert cuisine and Dagmar’s brilliant company, leave me in a state of complete bliss in this new-to-me city.

The warmness of Québec is more keenly felt, seen, and experienced against the backdrop of its snowy wonderland, one that will surely bring me back again during the coldest of seasons.

Montmorency Falls Park These stunning falls at nearly 400-feet-tall just outside of Québec City are open year-round. Take a cable car to the top, and then wind your way back down cliffside. 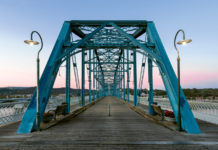 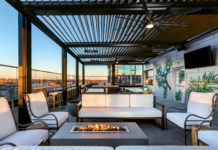 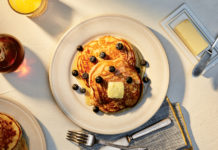