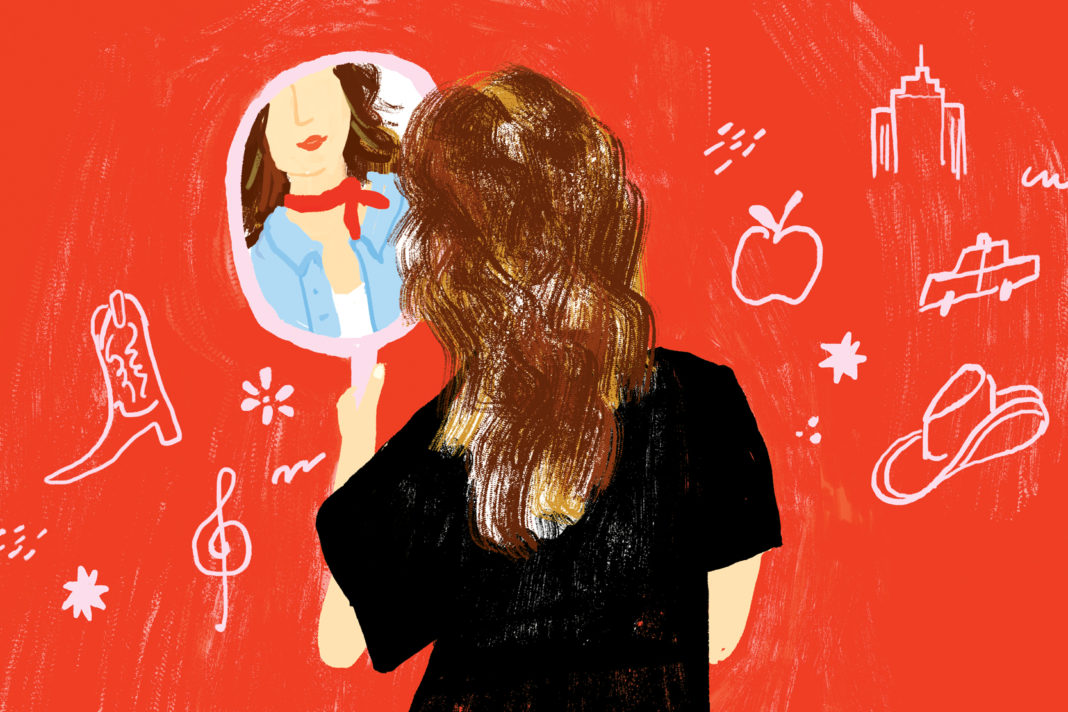 When I found out I would move to Nashville, Tennessee, for a year in 2018, my sense of presence wasn’t fully developed—though I’d been out looking for it. I’d left a stable career to pursue a creative one and found myself on what felt like a quest to uncover my purpose in the world. I’d visited Nashville once and thought it lived up to its reputation as a hub for creativity and style—emphasis on style—so I wondered who I might be on the other side of living there—if all the cowboy boots and lived-in ease would make an impression. By this time, I understood that places help shape us and leave fingerprints that stay long after we’re gone.

My interest in style, that curious trait often tangled up in the material realm, in clothes and shoes and consumerism, goes back to childhood. I can still see myself running uninhibited through the backyard in a favorite summer set, its oversized tee and matching lavender bike shorts both covered in palm trees. A year or two later, there was a long red sweatshirt with hearts appliquéd down the front—I paired it with stirrup pants and felt like a million bucks. There was also the time I cried, regrettably, when a curly-haired classmate shook her neon puff paint till it exploded across a beloved turquoise sweater. I was six, and they called my mom. The puff paint never came out.

The fascination with clothing carried on through middle and high school, though in those years it was at odds with uniforms I had to wear each day. In college, I started exploring a look of my own, which was liberating, but at the same time, began questioning what this interest in fashion might mean—if being drawn to clothing was meaningless or suspect or might even corner me in some realm where I didn’t belong. There were those who believed smart women shouldn’t care about things like makeup or wardrobe, it seemed, and others who paved their own way by doing it all. I wasn’t sure where I fit.

In my 20s, I dabbled briefly in florals and even some ruffles but eventually landed squarely in the realm of clean lines, leaning into an androgynous simplicity that seemed to stick. The lines held their own, but as I moved into my 30s, the shapes they drew expanded and evolved, often becoming oversized or experimental. I never stopped loving clothes, but as I aged, it became obvious that the intangible presence I admired—style—lived less in the material and more in a particular way of being. It was often subtle, even quiet, but it had a certainty I began to crave.

I wanted a confident, penetrating expression of myself—like cigarette smoke that hangs on when it’s not even there—something so true that it leaves me secure not only in my own skin, but in whatever clothes I put on top.

The stylish person seems so wholly centered in their truth that even their T-shirt tells their story. I wondered if I had a story of my own to tell, or if I was already telling one, and by the time I got to Nashville, it was starting to take shape. I’d spent the previous two-and-a-half decades trying on iterations of my personality that were meant to please and remain palatable, never to offend. I had to shed that Southern politeness, which carried the fingerprints of my Carolina youth, before I could rest comfortably in myself.

Along the way, at age 30 or so, I’d sensed it would become exhausting to keep forcing whatever innate presence I carry into anyone else’s box. I wanted a confident, penetrating expression of myself—like cigarette smoke that hangs on when it’s not even there—something so true that it leaves me secure not only in my own skin, but in whatever clothes I put on top. Once we find that ease, it seems, clothes blur into the background and only something I’d call style remains.

Before I got to Nashville, I’d lived in New York City for a year, where my wardrobe was purposeful, almost monastic. Everything I wore had a functionality about it that was meant for long days riding the subway and walking up and down Manhattan. Something about New York made purposeful feel beautiful, as if my hopes and dreams were so vital that they shouldn’t be impeded by a single thing. My direction became more important than any shoes doing the walking. That feeling of purpose took hold and stayed.

A few months after leaving New York, I got in the car and headed west, over the Blue Ridge and past the Smokies, to make a home in Tennessee. If purpose shaped style in New York, Nashville seemed to be about comfort, ease, and freedom to express. It didn’t take long to figure out Nashville is a place where a creative current runs through the city. Paired with that pulse of inspiration, there seemed to be an openness to whoever and whatever might walk through the door.

Once I got to town, the open-armed, friendly style of the locals felt like possibility. After unloading our bags on the very first night, we sat on the patio of a spot in Lockeland Springs and ordered pizza and cocktails. We told our server we’d just moved in. His first question was, “Do you like to dance?”

My answer was effusive, and he wasted no time finding a postcard to write down every dance floor we needed to know. I became a regular at the neighborhood coffee and amaro shop, where right away the bartender remembered who I was. I was glad to see her every Tuesday afternoon when my husband and I met there to unwind.

That welcoming spirit, over time, leaves fingerprints, too. I found it in restaurants, in shops, in the bookstore where I worked, and even began to recognize it in myself.

After a year passed, it was time to move on, though I wanted to stay. As I packed, I realized I’d found great pieces in Nashville—vintage sequins, a handmade dress, and impossibly good jeans. But my change in style had nothing to do with wardrobe and everything to do with finding abiding comfort in myself.

That didn’t happen on Broadway or in the buy-three-get-one-free boots shops, but in little corners of the city where I was welcomed, simply and assuredly, as I am.

Illustration by Karen Schipper. Lauren Maxwell is a writer living at the southern tip of the Blue Ridge Mountains. She publishes a weekly column called WE’RE ALL FRIENDS HERE.