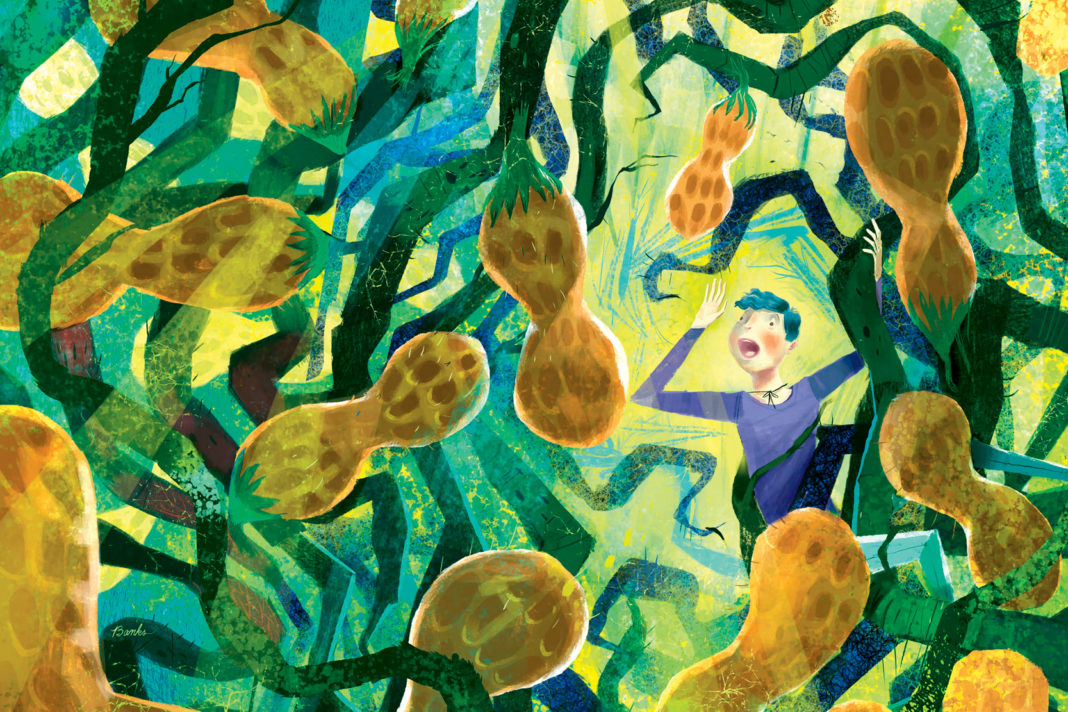 I’m fatally allergic to peanuts, and Halloween is my favorite holiday.

Those two statements are not at odds with one another. In fact, I’d go so far as to say one leads naturally to the other. As a kid, knowing that a significant portion of the candy handed out during trick-or-treating could have landed me in the hospital only heightened the joy of the evening for me.

I remember one year when I was maybe nine years old, I went out trick-or-treating with a group of friends from school. One of their moms was serving as a chaperone. At one point we got to a house that was giving out nothing but king-size Reese’s Peanut Butter Cups, which we all eagerly snatched up, myself included.

“Wait—no no no no!” My friend’s mom grasped for the pillowcase I was holding. “You can’t eat that! Put it back!”

“Put it back?” I scoffed. “Are you kidding me? A king-size Reese’s is worth, like, at least two regular-sized Starbursts. Two Sour Punch Straws if I’m lucky. Why would I put it back?”

For me, Halloween night was always a game of strategy, of weighing current value with opportunity value. Here’s a typical scenario: Let’s say we go to a house that was giving out Snickers bars and Hershey’s chocolate bars. The Snickers, chock full of peanuts, was deadly to me. The Hershey’s, though, was perfectly fine. But one-hundred percent of the time, I’d go for the Snickers, because I knew at the end of the night, I’d be able to trade that Snickers for something of far greater value than the Hershey’s.

The best part of Halloween came after the haul was brought in, after the streets went dark, when all of us kids would gather in someone’s basement to participate in that ancient ritual of free-market economics. Everyone in that basement knew half of my supply was worthless to me personally, but because I’d built up a reputation as a hard bargainer, they also knew I wouldn’t hesitate to toss those Reese’s Cups in the trash if I felt disrespected. Sitting cross-legged on the shaggy carpet under the popcorn ceiling, I’d lay my wares out before me like an old merchant trader on his rug, and the haggling would begin.

I realize now, of course, that for the parents of a child with a severe peanut allergy, Halloween can be an absolute nightmare. Yes, the holiday is meant to be scary, but plastic skeletons, glow-in-the-dark goblins, and tubs of fake worms don’t quite match the fear that comes from worrying you might have to stab your kid with a painful needle and then rush to the hospital while swerving through streets congested with other people’s kids, hoping you don’t take one out in the process, candy flying everywhere over your windshield.

And maybe I’m just outdated. When I was going through school, for example, the notion of a separate table for allergic kids would’ve seemed absurd. This was before allergen warning labels, before nut-free facilities, and before airlines decided that maybe peanuts were a bit of a liability and that pretzels were just as good.

I’d built up a reputation as a hard bargainer, they also knew I wouldn’t hesitate to toss those Reese’s Cups in the trash if I felt disrespected. Sitting cross-legged on the shaggy carpet under the popcorn ceiling, I’d lay my wares out before me like an old merchant trader on his rug, and the haggling would begin.

When I was a kid, my mom was diligent enough about reminding me to read the full label before eating anything and not to eat any bake-sale desserts, but it’s not as if we banned peanuts from the house. PB&J sandwiches, Reese’s Peanut Butter Cups, nutty granola bars, Reese’s cereal, you name it: peanuts in every variety stocked the shelves of my childhood home.

But of all the recipes my parents prepared, the runaway favorite in our house was always peanut-butter-covered pancakes. I could always tell when my dad was whipping them up as a nice Saturday morning treat, because I would invariably wake up with a headache. That thick, earthy, musty smell of mashed peanuts would waft up the stairs, slide through the cracks in my door and invade my nostrils, triggering my body’s “Oh my God, we’re going to die!” responses. It was a lovely way to start the day. Downstairs I would find my father waiting in the kitchen, grinning as he piled our plates high with those poison cakes.

I’d point down at my plate. “Really? Peanut butter pancakes?”

I’d like to point out here that, in this scenario, I was about first-grade age.

My dad would step back, sighing and shaking his head. “Oh, excuse me. Are peanut butter pancakes suddenly not good enough for you? You know, you can’t be such a picky eater, mister. I remember when I was a kid, if I didn’t finish my plate, you best believe my father would make me sit right there and finish it, so you kids really don’t even know how lucky you—Oh, crap, crap, right!” and he’d swipe my plate away, saying, “Sorry, sorry—don’t tell your mom!”

It’s always odd to me when I meet adults my age with an allergy just as severe as mine and yet no war stories to speak of. I’ve had to stab myself with an EpiPen countless times, but somehow these people made it all these years without one slip-up?

“Well,” they usually say, “I always took it seriously, so I’ve never had a reaction.”

And I can’t help but think, “but that’s a little boring, isn’t it?”

I know part of me is simply reacting to what I perceive to be a little bit of smugness in their tone, as if I’m somehow less-than for having taken a few rides to the hospital as an elementary school kid.

But another part of me wonders if kids with allergies might be deprived of small joys here and there along the way.

I’m sure for parents of kids with peanut allergies, at times it can seem like the stakes are horrifyingly high, because they are. How easy it would be if we all lived in a society where the rest of us peanut-allergy kids had just been sent out to the woods at the first sign of hives or a scratchy throat, sacrificed to die to ensure the genetic strength of the tribe. Maybe then us allergy kids would’ve even survived the wilderness and adapted into deadly tree people, swinging from branch to branch with our massive biceps, transformed into accidental super humans. Who knows? But unfortunately, our society has decided to adopt a slightly different response, and hence you can’t nibble on peanuts the next time you fly Delta.

I’ve read about some peanut-allergy parents opting to skip Halloween altogether, worried about accidental exposure, cross contamination, and poorly worded labels. As someone who loves the holiday, I’d advise them to reconsider. Even jungle gyms lead to skinned knees. Sometimes what’s less scary is just less exciting. Isn’t that what Halloween’s about? You never know what’s lurking in the dark around the corner, what’s floating in the mist, or what poison might be waiting in someone’s trick-or-treat bowl. Might as well have fun with it.

Even if your child comes home with an accidental Snickers bar tucked in their pillowcase, don’t panic. Instead, just take them aside, sit them down, and calmly but firmly say:

“Honey, what are you doing with this? That Snickers bar is worth at least two Nerds Ropes, three if you haggle right, so next time don’t let them shortchange you!”