Epic view or swimming hole? That’s a question I’m faced with when I strike out on a mountain adventure from my home base in Asheville, North Carolina. Thankfully, I have a less-traveled road trip I try to do once every summer that includes both. And I never forget to pack a picnic and my inner tube.

Accessible via Blue Ridge Parkway milepost 355, Mount Mitchell is not under the radar, but it is above the clouds and presents incredible views that, on a clear day, stretch 85 miles in all directions. At 6,684 feet, it’s the highest peak east of the Mississippi, and conveniently, you can drive nearly right up to the top. From the parking lot, it’s an easy 10-minute walk to the summit. There’s plenty more to do here, but aside from peeking into the small 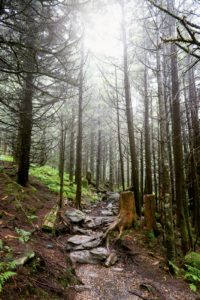 natural history museum and gift shop, I generally head on down the mountain, along the 52-mile Mount Mitchell Scenic Drive.

I follow the parkway to NC 80 for a descent into the spectacular Toe River Valley. The area is chock-full of artist studios and sprinkled with brightly painted quilt squares—all part of the WNC Quilt Trail—that liven up rustic barns and other notable landmarks.

I head to Carolina Hemlocks Recreation Area for an afternoon dip in the chilly, crystal clear South Toe River. The campground is lovely, tucked in a forest of hemlocks and with well-appointed shower amenities, but my favorite part is the many swimming holes, big rocks for sunning, and a small tubing run suitable even for the youngest of swimmers.

Back on the road, I never miss a pit stop in Micaville, for a peek inside OOAK folk art gallery and a pick-me-up coffee or sweet treat at Maples dessert shop next door.

It’s a scenic drive back to Asheville, passing through the adorable Rockwellian town of Burnsville, but if I have extra time and kids in the car, I might head east to the nearby town of Spruce Pine and Emerald Village gem mine and museum. Self-guided tours take in an impressive array of antique mining equipment and a visit inside one of the mines. It’s intriguing for all ages, but little ones will really enjoy prospecting for gemstones.

For 360-degree jaw-dropping views of mountain ridges in all shades of blue, it’s hard to beat Roan Mountain, a five-mile-long ridge that borders North Carolina and Tennessee. At 6,285 feet at its highest point, Roan holds the world’s largest naturally occurring Catawba rhododendron gardens, which bloom in mid-June. The mountain range also has a number of treeless mountaintop balds—with incredible spots for backcountry camping—and a rare high-elevation spruce-fir-forest ecosystem. 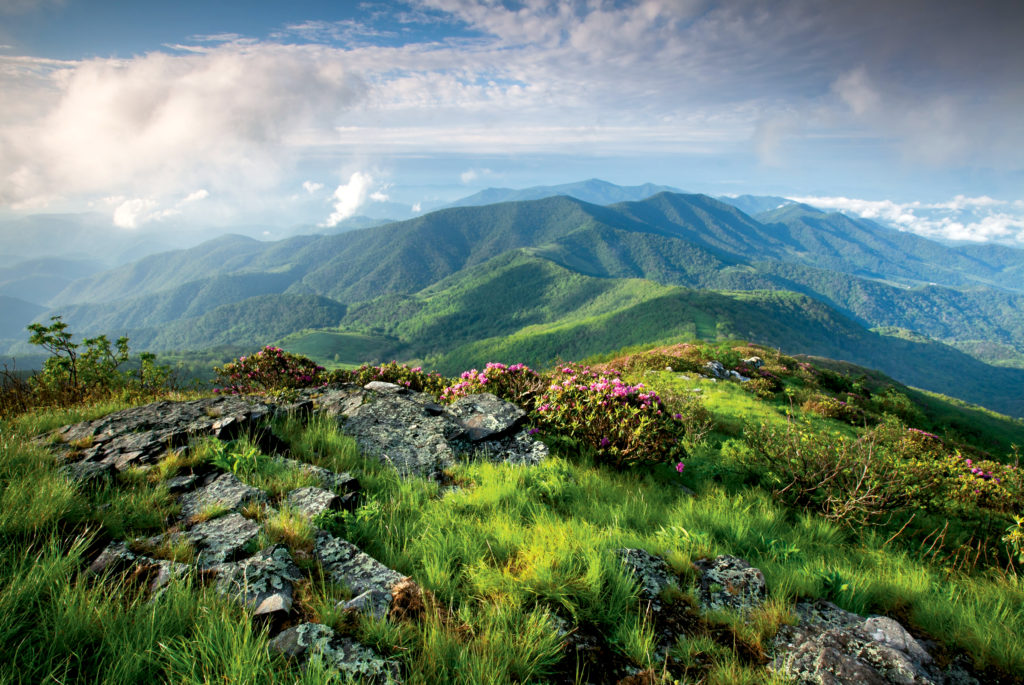 The Appalachian Trail traces the ridgeline and can be accessed for free from Carver’s Gap on the state border. It’s a moderate 5-mile round-trip hike to reach Grassy Ridge Bald , taking in Round and Jane balds along the way.

Alternatively, it’s $3 to access the Roan Mountain Recreation Area, from which the gardens are wheelchair-accessible, and you can also visit the ruins of the Cloudland Hotel that operated from 1885 until 1915. Interestingly, the state line bisected the building, marked by a white stripe on the dining room floor. For a while, alcohol was prohibited in North Carolina but not in Tennessee, so according to local lore, a sheriff was often on hand to make sure tipsy drinkers didn’t cross the line. 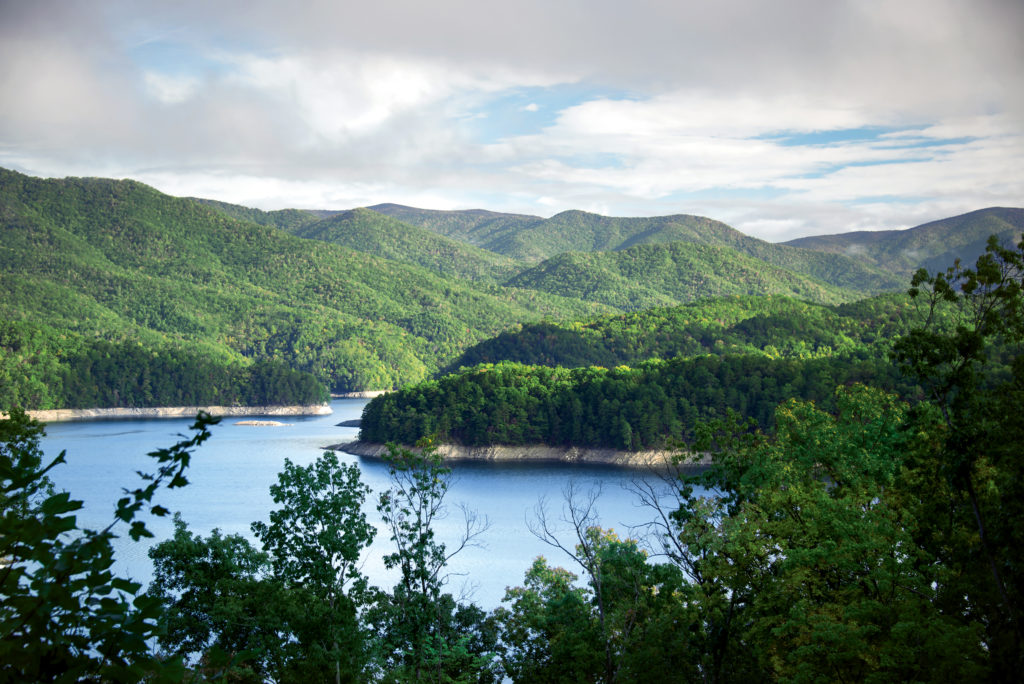 Flanked by the Great Smoky Mountains to the north and the Nantahala National Forest to the south, Fontana Lake is a natural wonder; around 90 percent of its 240 miles of shoreline is protected and undeveloped. While Fontana Village is the easiest option for nearby lodging, there are several hundred houseboats on the lake, many of which are rustic, off-the-grid (if not novel) vacation rentals.

Boating and fishing are the primary pleasures on the lake, but Fontana Dam is an attraction in and of itself. The tallest dam east of the Rockies at 480 feet, it was built during World War II to provide electric power during the war effort. It’s accessible to foot traffic, with nice views of the lake, and also in the path of the Appalachian Trail.

On the lake’s eastern side, Tsali Recreation Center has a reputation as one of the Southeast’s best mountain bike rides. Nearly 40 miles of single-track trails wind along the lakeshore. 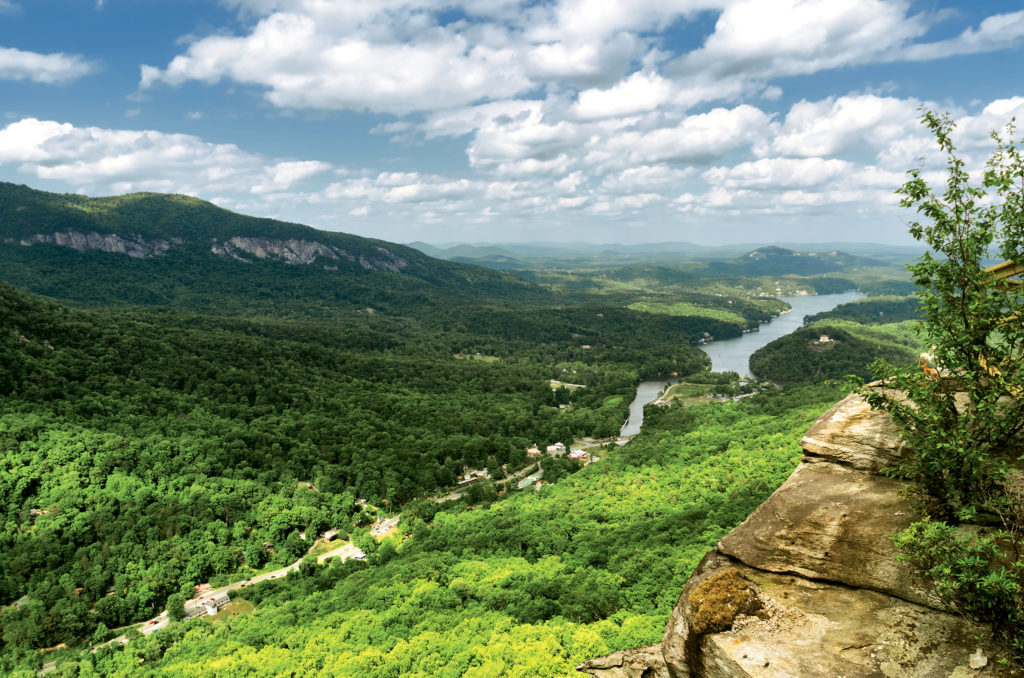 The North Carolina mountains are blessed with gorges aplenty, and one of my favorites is the 14-mile-long Hickory Nut Gorge, which winds down through a deeply green canyon to two spectacular jewels: Chimney Rock and Lake Lure.

The small town of Chimney Rock teems with visitors during a normal summer, with pedestrians browsing between the myriad shops and eateries, most of which are sandwiched between the main road and the gurgling Rocky Broad River. I always stop into Bubba O’Leary’s General Store for outdoor apparel and to get my fix for old-timey candy. Next trip, I vow to sit and sip a while at Burntshirt Vineyards’ spacious tasting room, where I can enjoy a view of the 535-million-year-old monolith for which the park and town are named.

The better part of a day could be spent at Chimney Rock State Park. I’d be remiss not to climb the signature 315-foot chimney, which offers stellar views over Lake Lure and the foothills beyond. The Skyline Trail is a great hike back up the gorge to reach the 404-foot Hickory Nut Falls. The park packs in plenty of other trails and opportunities for nature discoveries appropriate for all ages.

Back on the main drag, the towns of Chimney Rock and Lake Lure bleed into one another, but the Flowering Bridge is a noteworthy landmark boundary and is worth a stop. A defunct bridge-turned-garden, the free oasis welcomes visitors through a smorgasbord of profuse blooms, many of them native.

And never would I go to Lake Lure without a little time on the water, which presents jaw-dropping views back up the gorge. Unless you’re lucky enough to know someone who lives on the lake, you’re left with a few options: the Lake Lure Beach is a kids’ haven, with waterslides and water games; Lake Lure Tours offers boat rentals as well as boat tours, including a sunset dinner cruise that might just be my ideal way to end a day a perfect day in the gorge.

Often called the Grand Canyon of the East, Western North Carolina’s 12-mile-long Linville Gorge is the deepest in the eastern United States. It’s bisected by a river and surrounded 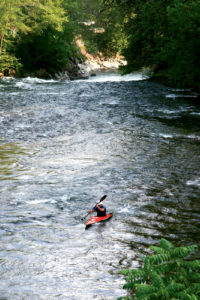 Due to its proximity to the Blue Ridge Parkway (near milepost 316), the 90-foot Linville Falls is how the majority of visitors experience this vast wilderness, but grand rewards await those who venture further afield.

There are 39 miles of trails between the east and west rims of the gorge, and day-trippers should pick one or two trails to explore on one of the sides. Popular west-rim hikes include Linville Falls and Babel Tower Trail, which both drop down into the gorge. On the east rim, Jonas Ridge, Table Rock Summit, and Shortoff Mountain trails all present soaring views above it all.

In North Carolina’s far western reaches, stretching 48 miles through a narrow gorge, the wild Nantahala River is a paddlers’ mecca and among the most-rafted streams in the country. It’s been one of the nation’s top training grounds for elite whitewater athletes since the early ’70s. Eight miles of mostly class II rapids are accessible to beginners, and ground zero for the fun is the Nantahala Outdoor Center in Whittier. Adventure seekers can raft with or without a guide, as a group or individually. And on the occasion when the NOC hosts a championship paddling event, it’s a chance to watch some of the world’s best kayakers in action.

Situated on the border of North and South Carolina, Transylvania County isn’t shy about its claim to fame. Known as the Land of Waterfalls, it holds a higher concentration of cascades than anywhere in the country—some 250. While I’ve visited gushers in Pisgah National Forest and DuPont State Park countless times, it’s Gorges State Park that I set my compass to when I’ve got a full day to hike and swim.

From the Grassy Ridge access area (the main entrance on the park’s western side), I head to the trailhead for Rainbow Falls with a picnic and swimsuit in tow. It’s a four-mile round-trip hike to reach two stunning gushers along the Horsepasture River: Rainbow Falls, named for the prismatic effects of sunlight and mist, particularly in the morning, is a 125-foot cascade, and Turtleback Falls is a natural sliding rock shaped like a turtle’s back, with a 10-foot drop into a clear pool.

As a bonus, it’s only an extra 15 minutes each way down NC 281 to reach Whitewater Falls, the tallest cascade east of the Mississippi; the Upper Falls in North Carolina plummets 411 feet. It’s accessible via a paved path a mere 100 yards from the parking area.

The natural wonders of Western North Carolina are plentiful and only a short drive from Greenville. It’s an invitation to relax in the heart of it all. 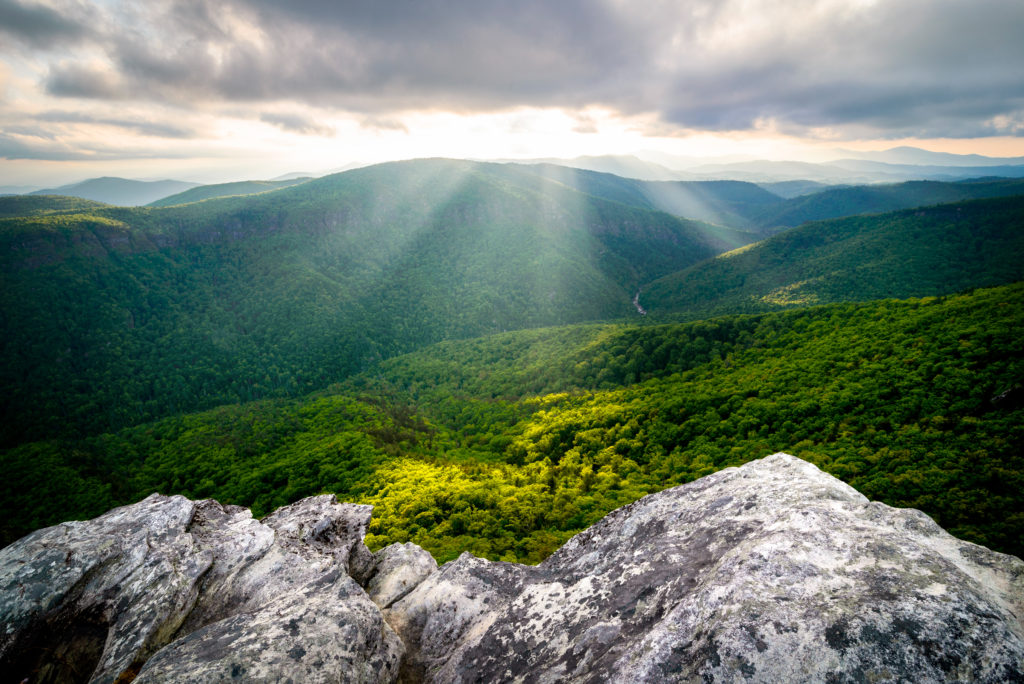 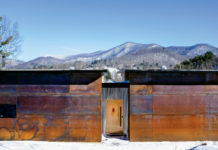 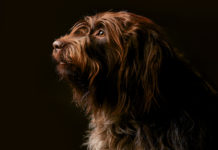