asks Kristian Niemi, a celebrated chef, restaurateur, and kitchen-knives aficionado in Columbia. “You know, they aren’t that easy to get rid of.” Niemi was among a crowd that showed up in mid-December to witness the launch of Gun Metal Forge, the brainchild of Karl Dunn, at a pop-up show near downtown Greenville.

Last fall, Greenville ad agency EP+Co., where Dunn works as senior vice president and director of content engineering, presented the “UnThink Challenge,” an intra-agency competition to develop a for-profit company that the agency could market. Teams pitched 40 ideas to their 200-some creative-braniac peers; submissions included philanthropic startups, a bartending app, and a Helmets for Heroes concept.

Con Williamson, the agency’s president and chief creative officer, says: “These guys took something, they took a headline idea, and turned it into an opportunity, like taking millions of old guns and giving them purpose—and they’re beautifully crafted into a conversation that isn’t political.”

Or, as Niemi puts it: “Some of the guns have a lot of history behind them. So, to just get rid of one by taking it to your local police department, that’s kind of a waste of its heritage. To be able to turn it into something else that’s useful is pretty cool.”

When he’s not working at EP+Co., Dunn, 56, hammers away as chief smithy in the company’s Taylors Mill workshop. There, he creates what Williamson calls “weapons of mass construction.” 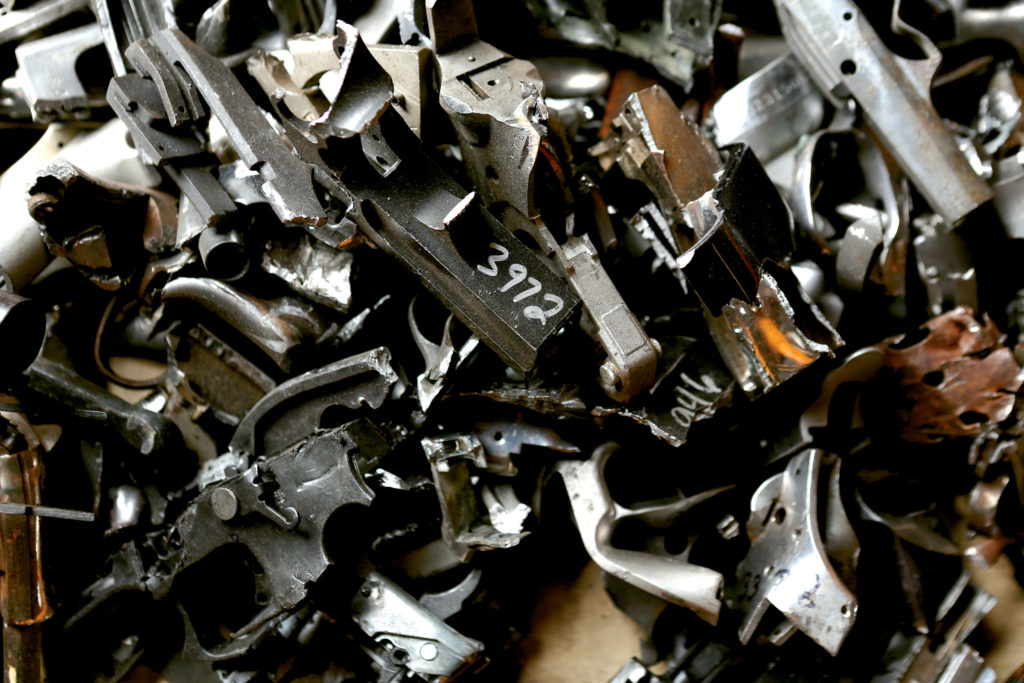 The business model started coming together around the time Dunn appeared in the History Channel’s Forged in Fire reality show that aired in October 2018. Over three days, he competed against three other blacksmiths in the program’s first-ever invitational tournament. The prize: $50,000.

The competitors were provided a selection of garden-shed tools, as well as smaller pieces, to fashion a terrifying-looking weapon: a knightly poleaxe. Dunn started with fishhooks.

“It looks dangerous,” a visitor says during a pre-Christmas tour of the chilly 13,000-square-foot space where Dunn and five or six others also build sets for mega-clients such as Men’s Wearhouse and John Deere; a small Haverty’s living room is arranged up front.

“It is dangerous,” Dunn says, showing off his 11-pound weapon that sports a bayonet-like blade, a hatchet, and a hammer that looks like a meat tenderizer. If you’ve got the stomach for it, watch Season 5, Episode 32. That’s when one of the judges, Doug Marcaida, tests the finalists’ products on a ballistics dummy.

After neutralizing the enemy mannequin, Marcaida, with a creepy smile and twinkle, tells Dunn, “Your weapon will destruct and kill.” But it didn’t win. In a later segment of the challenge, the hammer broke off—felled by an oak door. “That’s heartbreak,” Dunn says. “It was hard work, but it was so much fun, such an incredible experience.”

Still, Dunn showed off the talent, skills, and creativity he would later use in Gun Metal Forge. That’s typical of the packrat who lets nothing go to waste, especially ideas. He carries some with him from his childhood, where he found inspiration in his grandfather, George “Bud” Kennedy, a rancher and cowboy in tiny—and perfectly named—Rifle, Colorado.

“I would spend summers up there with him, and he had a little blacksmith shop,” Dunn says. “When he passed away, my father got all his stuff and said, ‘Hey, do you want these things?’” This was back in the days when Dunn worked in New York City, where he spent about a dozen years creating video and print campaigns for marquee ad agencies. All the while, he says, “I was collecting old tools just because I loved that kind of stuff, so I got his anvil and some of his tongs.”

Later, in Greenville and around the time of his TV appearance, he was helping his mother, Glenda, move out of their old home and into a townhouse. She had no idea what to do with her late father’s firearms. “So, she’s got a couple of shotguns and a rifle,” Dunn says. “What should I do with this? I don’t know. I mean, does anybody want them? I don’t want them, my siblings don’t want them, nobody wants them, and, you know, an 84-year-old woman doesn’t need two shotguns and a rifle.”

Seems that’s not so uncommon.

Chip Ayers, once a member of the U.S. Secret Service’s elite Counter Sniper Team and now president of the National Center for Unwanted Firearms, says the Montana-based nonprofit in 2018 helped someone in a Greenville suburb dispose of, count ’em, 260 inherited guns. Federal regulations concerning their disposal are thorough, Ayers says. “We give good, free, sound advice how to legally transfer firearms.” He calls Gun Metal Forge’s model “nothing but positive. I’ve already put that on my agenda to reach out to them.”

In the rear of his workshop, Dunn shows how it’s done.

He fires up a forge, which looks and sounds like a blowtorch in a shoebox. Once the heat reaches 1,700 degrees, with orange and white-hot flames, he inserts a piece of chromium steel. Once that turns molten-y red, he takes it to the anvil and begins pounding. Whenever the steel cools, back into the forge it goes, until the smith has shaped it into, say, a bottle opener.

Gun Metal Forge gets the bulk of its materials from GunBusters Firearms Pulverizer, based in Chesterfield, Missouri. Scott Reed, the president, says the company acquires all unwanted firearms from law-enforcement agencies.

In its four years, GunBusters has crushed some 30,000 firearms. A proprietary machine 15-feet long by 5-feet wide by 6-feet tall shreds the tightly inventoried and videotaped weapons into 1-inch-square pieces—except for the sections Gun Metal Forge purchases.

“He’s found kind of a niche, and the tools look gorgeous,” Reed says.

Dunn works with GunBusters lock, stock, and barrel to get larger pieces. From one shipment, he culled a 3-inch section of a barrel from a .308 rifle that still included a little of its serial number. Another stamp showed it came from Pasadena, California.

Dunn forged it into a bottle opener, which wound up in the hands of Christian Vande Velde, the onetime Tour de France professional who now lives in Greenville and appears on NBC as a cycling analyst.

He also appeared at the pop-up in December because, like Niemi, he’s known the EP+Co. guys for years. 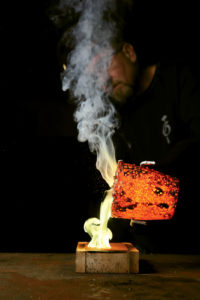 “I had no idea what we were looking at when we got there,” he says of his visit during the two-day debut. “I like the story behind anything that tells a story, a history. I think that’s really cool.”

“It’s cool to think of where it’s been sitting the last 20, 30, 50, 80 years, in somebody’s closet or shed or wherever it came from,” Vande Velde says of his purchase, which also comes stamped with the Gun Metal Forge logo.

Turns out at least one other company in the United States does much the same thing. In 2013, a 30-something-year-old Mennonite started Raw Tools in Colorado Springs, where amateur types are actually invited to take their energies out on, say, a dismembered AR-15, banging it into a garden hoe or mattock.

As for Gun Metal Forge, Dunn says, “I’d love to figure out how we could do this large scale.” He and Williamson say the big-picture plan is to market Gun Metal Forge for licensing or franchising nationwide. And, wouldn’t you know, high-end branding happens to be EP+Co.’s stock-in-trade.

“Our tools could be used by other smiths around the country,” Dunn says, “to do the same kinds of things and to give back to their communities.”

For more on Gun Metal Forge, check out gunmetalforge.com.